With the 2014 election now in the history books, the reality is that the 2016 campaign is upon us. And you can expect Texas to get more time in the spotlight now that the 2016 GOP presidential primary is a main attraction.

Texans will also go to the polls earlier in the primary season than they did in 2012, when the legal fight over Texas’ redistricting map delayed the election until May. This time, Texas is considering a March 1 primary — the earliest date allowed after the Iowa, New Hampshire, South Carolina and Nevada contests. Texas’ delegate count is more than those four states’ combined and second only to California’s in total size. Given the possible lack of a Mitt Romney-like front-runner, this could make Texas far more consequential in the primary process. If this order holds, whoever wins the state will likely automatically claim top-tier status.

University of Texas/Texas Tribune polling this year reflects the development of Cruz and Perry as the id and ego of the Texas GOP, respectively. Not shockingly, given the tenor of GOP politics in the state, the id has led the way among Texas Republicans this year. While these results are strongly influenced by current state factors, there’s little reason to think that these assessments won’t influence Texans’ vote in 2016.

Cruz has consistently led in these speculative 2016 matchups, though Perry gained ground in the most recent survey, likely elevated by his deployment of the National Guard to the border — a hit among almost all voters, but an especially popular move among Republicans. 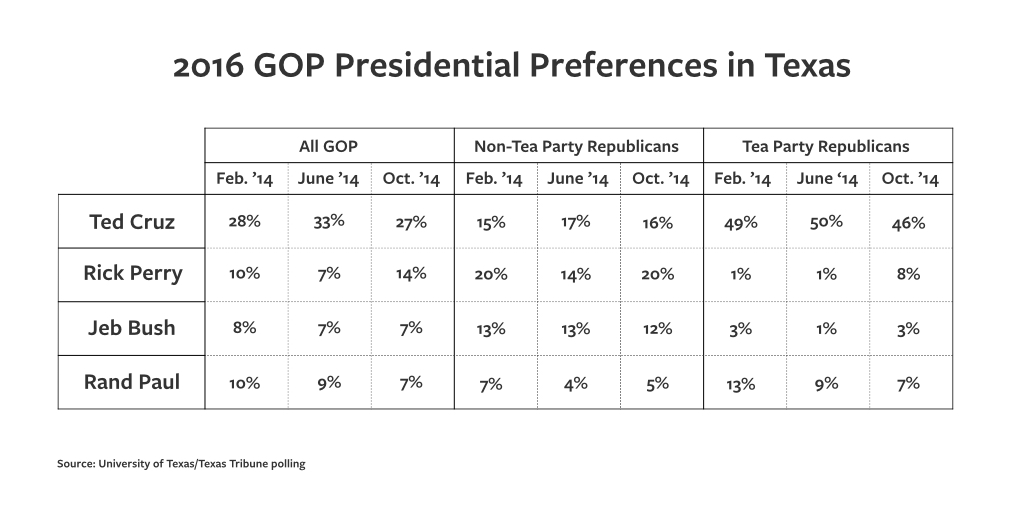 But it’s Cruz who so far appears to be the most likely benefactor of an early primary in Texas. His appeal is strongest among Tea Party Republicans, almost half of whom favor him, and who, based on recent elections, are sure to heavily influence the 2016 primary. Perry runs stronger than Cruz among non-Tea Party Republicans — something of a thorn in the side of a governor who recognized and rode the Tea Party wave in 2010 when other Republicans were less embracing, though also consistent with Perry’s pivot back to his self-branding campaign as a can-do, pro-growth governor. This dynamic indicates that Perry may need to drive up turnout in the Texas primary — an expensive and difficult proposition — to avert the fatal wound of being blown out in a state that he governed for 14 years.

The results of the 2014 elections, as well as the general volatility of the field, are likely to trigger adjustments among the candidates, especially the Texans. Cruz may feel pressure to do less bomb-throwing and more legislating now that he’s a member of the legislative majority — with the twist that his lack of experience as a one-term senator might invite comparisons to Barack Obama. The immediate burden on Perry, meanwhile, remains the same: He’ll have nothing to do but run for president come 2015, but he still needs to put some distance between the Perry of 2016 and the Perry of 2012 — a run that made an unfavorable impression on Texans.

It’s difficult not to see the current array of Texas-linked candidates as a reflection of the contending visions of the Republican Party. Cruz and Rand Paul are each maneuvering to appeal to the more conservative, grassroots wing of the party. While not constituting an overwhelming majority of the party, even in Texas, these voters have played a defining role in many primary elections in the state in recent years, even as their national influence has been much more diffuse. These voters are also Cruz’s base in Texas: In the most recent UT/TT Poll, Cruz was the choice of 43 percent of voters who identified as “extremely conservative,” with Paul at 5 percent.

Jeb Bush has seemingly emerged as the candidate of a more traditional GOP mold: conservative by any broad measure but appealing to the less ideologically driven factions of the party. Perry appears to have thrown his lot in as a candidate who has credentials among the conservative faction but, at the end of the day, is comfortably at home in the tent of business-friendly Republicans. Immigration and border security remain Perry’s trickiest play with the conservative base: He was famously booed during the 2012 primary for his defense of the so-called Texas Dream Act, though he has demonstrated a singular talent for using Obama as a tuning fork for resonating with the Republican base on border security — a talent on display yet again this month. The president’s executive order on immigration will further limit Perry’s options on the issue, as any compromise (such as defending the Texas Dream Act) is likely to be interpreted as being soft.

Perry’s public ruminations about suing the Obama administration over the president’s executive action on immigration are just the latest of the many maneuvers we’ll see as candidates attempt to position themselves in a wide-open field. The question is whether Perry can replicate the image he maintained as governor as a Republican for all Republicans — to the right of Bush (and, importantly, of the Bush brand in Texas) but a smidge to the responsible side of Cruz and Paul (but don’t you dare call it “left”).

Cruz has clearly taken Perry’s place in the hearts of many hot-blooded Texas conservatives. Should Perry make suing the Obama administration over immigration policy his swan song in the governor’s office before finally relinquishing it in January, it’ll be a final ode to the passionate embrace the governor and his base once shared — and, implicitly, a plea for another chance. But it’s a relationship that has become complicated, with many more potential partners to be wooed.