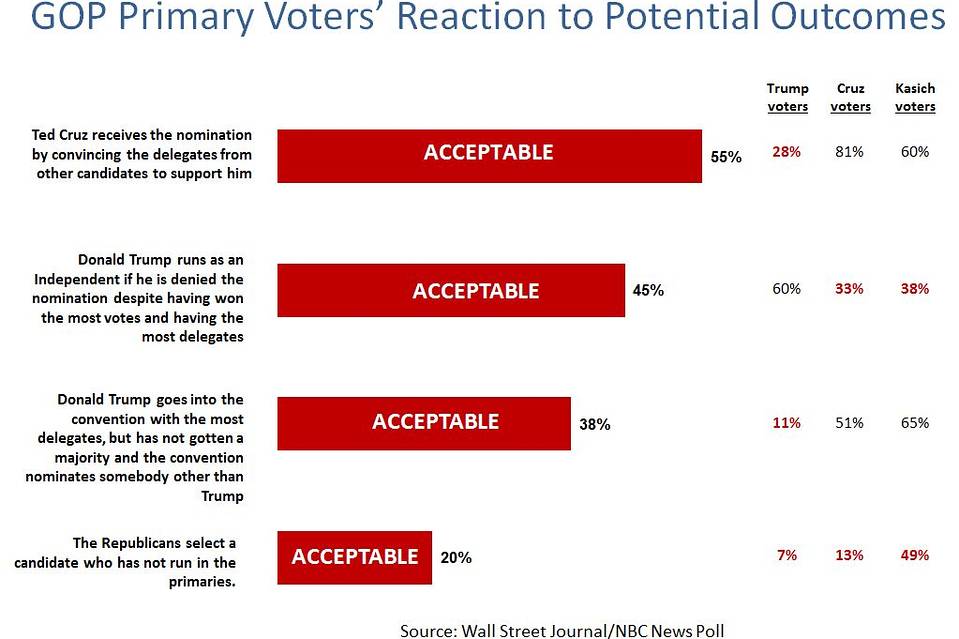 The bad news for Republicans is that this is the high-water mark for potential outcomes in their nominating process should no candidate win enough votes to secure the nomination outright before the convention. Consider:

* 55% of Republican primary voters say it is acceptable if Ted Cruz receives the nomination by persuading delegates from other candidates to support him. Just 28% of Trump voters agreed with this.

* 45% of Republican primary voters say it is acceptable for Donald Trump to run “as an Independent if he is denied the nomination despite having won the most votes and having the most delegates.” Although 60% of Trump voters find this acceptable, only 33% of Cruz supporters and 38% of Kasich voters agreed.

* 38% of Republican primary voters say it is acceptable if the convention produces a nominee other than Mr. Trump if he goes into Cleveland having won more delegates than his rivals but not having achieved a majority. Majorities of Cruz and Kasich voters find this to be acceptable (51% and 65%, respectively), but just 11% of Trump voters share this view.

* Just 20% of Republican primary voters say it is acceptable if the convention nominates a candidate who has not run in the primaries. While Kasich voters are at least lukewarm to the idea (49% say this is acceptable) this is one instance where Trump and Cruz voters share common ground: only 7% of Trump voters and 13% of Cruz voters would find this acceptable.

In short, when presented with convention scenarios in which the GOP nominee is not the candidate with the most votes, a majority of Republican primary voters found only one acceptable (if Ted Cruz is nominated after persuading other candidates’ delegates to support him). And the levels of acceptance vary widely among supporters of the three candidates. That suggests that a contested convention could leave the Republican Party even more fractured after the convention than it is now.

Modern-day political conventions are designed to show the best face of the party; it has become a days-long choreographed display of a shared vision for the country, with internal divisions buried. In 2012, the Republican convention highlighted Ann Romney, vice presidential nominee Paul Ryan, and presidential nominee Mitt Romney on different nights. In the event of a contested convention, what kind of Republican Party will the country see? And if a nominee isn’t clear before the convention, how will it be planned?

Against this backdrop Donald Trump’s warning about the potential for riots at a contested convention is much less surprising. Also not surprising is that some Republican leaders are making plans to be somewhere other than Cleveland in late July. Their decision has nothing to do with the city (despite its unfortunate moniker as the Mistake by the Lake) and everything to do with what could be happen during the GOP convention. As Randy Newman sang: “There’s a red moon rising on the Cuyahoga River rolling into Cleveland to the lake . . . burn on, big river, burn on.”