Note: this is the first in a series of posts explaining the National Academies of Sciences, Engineering, and Medicine’s (NASEM) recent report on the education of dual language learners (DLLs) and English Learners (ELs), Promoting the Educational Success of Children and Youth Learning English: Promising Futures. To read New America’s coverage of the report’s publication, click here. This series is designed to serve as a companion document to the report. Each post will explore how one of the report’s key themes relates to DLLs/ELs’ success at school.

The relationship between DLLs/ELs and immigration is complicated. Immigration rates unquestionably contribute to the numbers of DLLs/ELs in U.S. schools. Many immigrants to the United States speak a language other than English as their native tongue, so many immigrant children are DLLs/ELs. However, it is also the case that, as the NASEM report notes, “The majority of children in the U.S. EL population are born in the United States and are birthright citizens” (3-9). This is particularly true for the youngest cohorts of ELs, as indicated in this chart from the report (3-9): 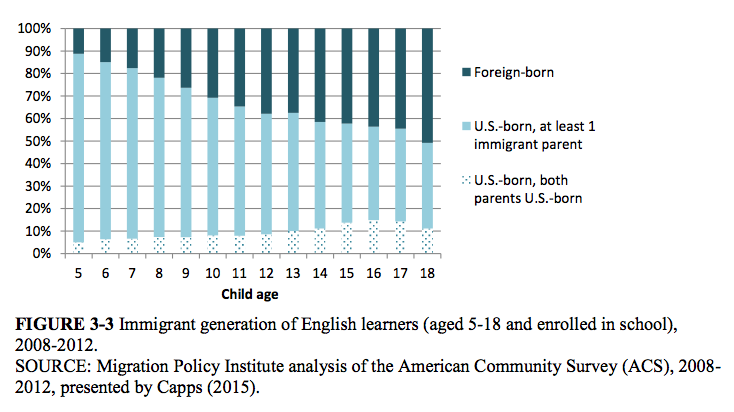 In other words, many DLLs/ELs are simultaneously children of immigrants and native-born American citizens. These two identities intersect with one another to influence DLLs/ELs’ educational experiences in complex ways that vary according to a diverse set of factors.

For instance, as the report notes, “children in immigrant families are more likely than their counterparts with U.S.-born parents to grow up in economically disadvantaged circumstances…fully 65 percent of all ELs meet the threshold for free or reduced-price school lunches, compared with 36 percent of non-ELs” (3-14–15). Further, DLLs/ELs “are more likely to live in families in the lowest-income quintiles” (3-14). In addition, compared to non-EL peers, DLLs/ELs are more likely to have parents who have not completed high school. Finally, the controversial and uncertain politics of immigration in the United States often contribute significant stress to DLLs/ELs’ families, which can damage their relationships with school and become an obstacle to academic success.

But averages do not capture the range of experiences that DLLs/ELs have in their families, communities, and schools. Their families frequently have diverse cultural and linguistic backgrounds, levels of formal parental education, religious affiliations, and socioeconomic statuses. Furthermore, they arrive and live in an array of communities with different attitudes towards immigration in general and linguistic diversity in particular.

These diverse factors intersect to produce a wide range of DLLs/ELs experiences in U.S. society. This can make generalizations about what DLLs/ELs need from public institutions — including schools — more difficult. For an example, consider variations between different Vietnamese immigrant families. These are, as the report puts it, “a bifurcated group: a significant portion are poorly educated and have not graduated from high school, and another significant portion are highly educated and have attained at least a college degree” (3-26). Children from each of these portions of the group are likely to have different levels of exposure to English and Vietnamese, and those differences are likely to influence their vocabulary and early language development.

This is just one example, of course. There is some evidence that DLLs/ELs with different native languages develop their English proficiency in different ways — DLLs/ELs who speak Spanish at home may develop their bilingualism differently than DLLs/ELs who speak Hmong at home, for instance. There is some evidence that a DLL/EL’s native language (and his or her levels of native language proficiency) can have a significant influence on their academic trajectories and rate of English acquisition in various instructional models, such as bilingual education or English as a Second Language programs.

All children have unique educational strengths and needs, but the diversity of immigrant and DLLs/ELs experiences can pose challenges for teachers, administrators, and policymakers. Current data sources can make it even more difficult to get a clear view of different groups of children in U.S. schools. For instance, national data on DLLs/ELs is often an aggregation of state data on the number of DLLs/ELs in their schools, but states use different assessments and set different benchmarks for identifying DLLs/ELs. Census data relies on a variety of different national surveys to provide a view of American households where English is spoken (to varying degrees).

Unsurprisingly, these different data sources can present a confusing picture of demographic trends for American DLLs/ELs and children of immigrants. The NASEM report concludes that “[the] limitations of current data sources compromise the capacity to provide a more comprehensive description of the population’s characteristics” (3-28–9). In response, it recommends better federal guidance on assessments for DLLs/ELs and calls for the development of “a common definition” of the group (13-3 and 13-7). Ideally, these moves could help national policymakers get a clearer picture of the nation’s DLL/EL population, allow researchers to better evaluate the efficacy of different DLL/EL instructional practices and policies, and inform educators’ pedagogical approaches.

Conor P. Williams is the founding director of the Dual Language Learners National Work Group at New America. He is also a senior researcher in New America’s Education Policy program.

A Progress Report on Charter Schools