Chief executives of more than 80 big-name U.S. corporations, from Aetna Inc. AET +0.66% to Weyerhaeuser Co., WY -1.11%are banding together to pressure Congress to reduce the federal deficit with tax-revenue increases as well as spending cuts. The CEOs, in a statement to be released on Thursday, say any fiscal plan “that can succeed both financially and politically” has to limit the growth of health-care spending, make Social Security solvent and “include comprehensive and pro-growth tax reform, which broadens the base, lowers rates, raises revenues and reduces the deficit.” 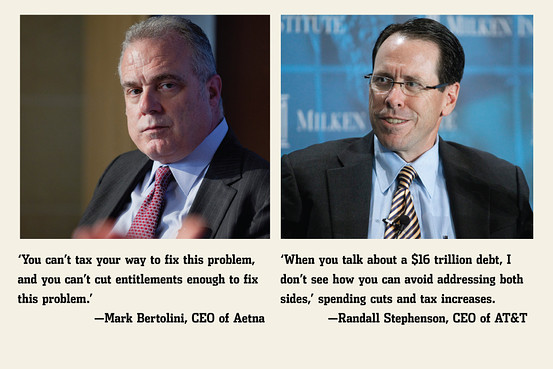 The declaration differs sharply from those of several other business groups, which urge Washington to deal with the deficit and avoid across-the-board spending cuts and tax increases set for year-end—but avoid any stance on the politically charged issue of raising taxes.

The CEOs who signed the manifesto deem tax increases inevitable no matter which party succeeds at the polls in November. “There is no possible way; you can do the arithmetic a million different ways” to avoid raising taxes, said Mark Bertolini, CEO of Aetna. “You can’t tax your way to fix this problem, and you can’t cut entitlements enough to fix this problem.”

Executives Who Support Tax Increases to Fix the Deficit

Executives at more than 80 major U.S. corporations released a statement in October to pressure Congress to reduce the federal deficit with tax increases and spending cuts. See the full list of who signed the statement.

Mr. Bertolini emphasized that he and like-minded CEOs will resist raising taxes unless accompanied by significant spending restraint. “If someone were to make the argument, we just want to increase revenues so we can increase entitlements, the answer is no,” he said.

Attempting to create a climate in which compromise is possible, the business executives are stepping into a debate over taxes that is one of the defining differences in the presidential campaign. President Barack Obama says tax increases on upper-income Americans, CEOs included, are an essential and fair element of any deficit-reduction program. Republican candidate Mitt Romney is against raising taxes, but backs a tax overhaul that he says would spur economic growth.

The executives didn’t endorse Mr. Obama’s proposal to raise the marginal income-tax rates for the top 2% of taxpayers or any other proposal. Rather, they called for an overhaul of the tax code that, among things, would eliminate or reduce deductions, credits and loopholes (known as “broadening the base”), and one that also would bring the Treasury more revenue than the existing code does. The CEO statement was organized by the Fix the Debt campaign, a bipartisan effort largely inspired by Republican Alan Simpson and Democrat Erskine Bowles, who chaired a 2010 deficit panel appointed by President Obama and have been crisscrossing the country sounding fiscal alarms.

The executives called the Simpson-Bowles commission approach—about $3 in spending cuts for every $1 of tax increases—an “effective framework” for addressing what they termed “a serious threat to the economic well-being and security of the U.S.”

Romney campaign spokeswoman Amanda Henneberg said, “As president, [Mr. Romney] will bring his record of bipartisan success to Washington and put us on a path to achieve more than the Simpson-Bowles commission ever proposed—balancing the budget within the next 10 years,” said.

Read the full text of the CEO manifesto

Obama campaign spokesman Ben LaBolt said, “There’s a strong and growing consensus that the only way to reduce the deficit while also growing the economy is through a balanced approach that includes both tough spending cuts and increased revenue.”

Some CEOs who have endorsed the group’s statement, such as GE’s Jeffrey Immelt, J.P. Morgan’s James Dimon and Honeywell‘s HON -0.87% Dave Cote, have been outspoken on public policy issues. Others, such as Deere DE -0.85% & Co’s Samuel Allen and Motorola Solutions‘ MSI +3.51% Gregory Brown, haven’t been.

Many corporations rely on traditional Washington business lobbies, such as the Business Roundtable, U.S. Chamber of Commerce and National Association of Manufacturers, to speak for them on national policy issues, such as trade pacts or corporate taxes or high-skilled immigration. Fix the Debt is unusual in two respects: It circumvents those groups, which often find reaching consensus on contentious issues difficult, and is centered on the CEOs themselves, as opposed to their companies.

AT&T Inc. T -0.83% CEO Randall Stephenson said heads of capital-intensive companies, now making spending plans for next year, were easiest to enlist. They are particularly alarmed, he said, by the looming fiscal cliff, the spending cuts and tax increases set for Dec. 31 unless there is agreement on an alternative road to deficit reduction. “It is already having a direct and immediate effect on us,” he said.

Mr. Stephenson, a Romney backer, regards tax increases as unavoidable. “When you talk about a $16 trillion debt, I don’t see how you can avoid addressing both sides,” namely spending cuts and tax increases. Asked about the difference between his position and Mr. Romney’s, Mr. Stephenson said: “This is bigger than any one political candidate.”

Notably absent from the Fix the Debt list are CEOs from big U.S. energy companies, some of whom fear that tax increases will fall more heavily on them, particularly if Mr. Obama is re-elected, and from Silicon Valley.

“We actually are planning events in Houston and Silicon Valley for that very reason,” said Maya MacGuineas, director of the nonpartisan Committee for a Responsible Federal Budget, which spawned Fix the Debt. “It isn’t that we have gotten ‘no’s’ from these groups, we’ve just not met with them yet.”

Hard-line foes of tax increases aren’t likely to be moved by the CEOs.

“When bipartisan deals are struck promising to cut spending and raise taxes, the spending cuts don’t materialize but the tax hikes do,” Grover Norquist of the anti-tax Americans for Tax Reform, has said.

The CEOs aren’t backing specific proposals for raising taxes or cutting spending, instead arguing that “everything should be on the table.” Several see corporate tax reform as a way to shift the tax burden among companies rather than a way to raise revenue, which leaves increases in individual income taxes as the major option for raising money.

Fix the Debt has been building its roster of executives over several months, drawing in some CEOs who usually aren’t visible in Washington. Deere’s CEO, for instance, said he was invited to a dinner in Washington, D.C., by Eaton Corp.’s ETN -1.23% Sandy Cutler, an early recruit, and was told five senators would be there. “There were 14,” Deere’s Mr. Allen said, “and they talked about the need to work on a bipartisan basis and how they needed the business community to be involved and for CEOs, and I’ll use their words, ‘to provide cover.’ ”

Aetna’s Mr. Bertolini traced his involvement to February 2011 when he called on Sen. Mark Warner (D., Va.) just as a meeting of the Gang of Six, a bipartisan group of senators pursuing a deficit compromise, was breaking up. “Sen. Warner put his head in his hands, and said, ‘Why is this so hard?’ ” Mr. Bertolini offered some lessons from his career, and asked what he could do to help. “Warner said, ‘Well, you can get the damn business community to line up,’ and went off on a 20-minute tirade about the business community sitting on their hands,” Mr. Bertolini recalled.

Scars from the market-churning August 2011 showdown on Capitol Hill over raising the federal debt ceiling also prompted some executives to speak up now.

“The business community was stunned that Washington let it go that far,” said Motorola Solutions’ Mr. Brown. “Part of the reason for uniting behind this effort is that we wanted to highlight that we don’t want a repeat of those political theatrics.”

Aetna’s Mr. Bertolini wouldn’t say how he plans to vote on Nov. 6. He has contributed to re-election campaigns of a handful of senators from both parties, but not to either presidential candidate, according to the Center for Responsive Politics.

Most of the companies whose CEOs have enlisted in Fix the Debt have political-action committees that make substantial campaign contributions, usually to candidates of both parties and mostly seen as advancing their corporate interests rather than the broader national interest. Concerns about the risk that mounting debt poses to the nation, the CEOs said, prompted their companies to contribute to Fix the Debt. The campaign has raised about $35 million for staff and, possibly, paid advertising after the election.

A version of this article appeared October 25, 2012, on page A1 in the U.S. edition of The Wall Street Journal, with the headline: CEOs Call for Deficit Action.

Yes, Mr. President, we are a nation of takers