Amid Chaos, Speaker Presses for Agreement’s Passage, Forcing Rank and File to Confront Risks of Intransigence House Speaker John Boehner, who for two years has been buffeted by the conservative inclinations of his rank-and-file, watched in silence during a meeting with his Republican members Tuesday, as one by one they rejected a deal that passed the Senate overwhelmingly just hours earlier.

Joining them was his No. 2, Majority Leader Eric Cantor, who told the closed-door session in the Capitol basement that he opposed the deal designed to avert the fiscal cliff, which the U.S. has technically gone over.

Once again, Mr. Boehner’s leadership seemed surrounded by chaos, as it has in other showdowns with Democrats on fiscal matters. But the speaker found a way to turn aside the very real prospect that the deal would fail in his chamber, which would have forced the White House to renegotiate with the new Congress that takes office on Thursday.

Mr. Boehner always said he would lead his House Republicans with a soft touch, giving deference to committee chairmen and allowing rank-and-file members to have their say. On Tuesday, Mr. Boehner moved the deal through his chamber not by dictating an outcome, but by presenting a choice.

In a Tuesday night session, the speaker said the GOP conference could add $300 billion in spending cuts to the Senate-passed bill, an option that might mollify House conservatives anxious about the lack of deficit-reduction in the bill. If that option didn’t have sufficient votes—and it turns out it didn’t—Mr. Boehner said the house would move on to considering the Senate measure.

Both Messrs. Boehner and Cantor cautioned that the Senate might not take up the amended legislation.

That would leave the House to blame for standing in the way of a bill that sailed through the Senate and had been blessed by the administration, opening the GOP to fresh blame.

The strategy forced Mr. Boehner’s rank-and-file to confront the risks of their intransigence. By Tuesday evening, Republicans rose in the closed-door session to say they wanted to vote solely on the Senate-passed measure.

Instead of new gridlock and setbacks, the deal crafted by Vice President Joe Biden and Senate Minority Leader Mitch McConnell (R., Ky.) won approval in both chambers of Congress, but only after a wide majority of Mr. Boehner’s Republican colleagues voted against it, including Mr. Cantor and his no. 3, House Majority Whip Kevin McCarthy (R., Calif.).

The Senate-passed measure would preserve the current income-tax rates on household income below $450,000, extend federal jobless benefits and defer scheduled across-the-board spending cuts for two months as Congress takes another stab at paring the deficit.

Still, Tuesday’s drama illustrated how hard it is for the speaker to manage his volatile caucus. When the deal was coming together, Boehner aides expressed their concern to Mr. McConnell’s staff that delaying the cuts for two months could face House resistance. At a meeting of party leaders Tuesday morning, Mr. Boehner and his team expressed frustration with the deal and decided to hear other lawmakers’ concerns before determining how to proceed.

The fireworks began even before Republicans entered the first of two meeting with their leaders Tuesday.

Looking Over the Fiscal Cliff

The federal government faces a rolling series of deadlines over the next few months in its continuing budget battle. Take a look ahead. 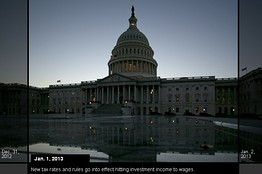 Falling Over the Fiscal Cliff

See some scenarios for how different groups of people may be affected by the tax changes that will take place if the fiscal cliff isn’t resolved by the Jan. 1, 2013, deadline. 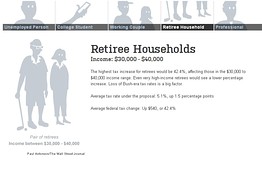 “I wish I could say this was a proud moment,” said Rep. Darrell Issa (R., Calif.), who criticized the bill for its failure to cut spending and tackle long-term deficit problems. “I may vote for what comes to the floor…but it is the smallest finger in a dike that has in fact a hundred holes in it.”

“This isn’t a done deal by any stretch,” said Rep. Steve LaTourette (R., Ohio), a retiring centrist serving his final days in the House. He questioned the wisdom of accepting “a package put together by a bunch of sleep-deprived octogenarians on New Year’s Eve.”

“The spending part is killing me,” said Rep. Mick Mulvaney of South Carolina, one of 87 House Republicans elected as part of the class of 2010 that has, on occasion, given party leaders fits. “All we see is tax increases.”

Mr. Boehner opened Tuesday’s session by reminding his colleagues that he was “not party to this deal,” telling them, “I didn’t negotiate it, and I haven’t endorsed it,” according to notes provided by one attendee. He said they would decide their response together.

Mr. Boehner favors subtle coaxing to direct confrontation. He spent months planning his strategy to get Republicans to accept a deal that would raise tax revenue. Conservatives, however, have bristled under his slow-and-steady approach.

The speaker reminded the attendees that technically the U.S. had already gone over the cliff. Moments later, Mr. Cantor said he opposed the measure in its current form, a view he had already expressed to other leaders, according to GOP aides.

The declaration was read by some as a direct affront to Mr. Boehner.

A version of this article appeared January 2, 2013, on page A4 in the U.S. edition of The Wall Street Journal, with the headline: Boehner Shepherds Deal Through House.