The second part in a series On Monday, we examined the expansion of the GOP coalition in the South over the past 28 years.  We framed this as a follow-up to a series that the lead author and Jay Cost wrote eight years ago at RealClearPolitics.  That series identified the Democrats’ growing weakness in the West South Central and East South Central regions of the country, but missed the full import of this discovery.

It is our claim today that, in retrospect, the original series identified a contagion at the heart of the Obama Coalition: the weakness with rural and small-town voters. We believe that this contagion was (a) consequential and (b) spread throughout Barack Obama’s two terms.

Today, as we examine the West, we will see an example of what happens in states where the rural vote isn’t efficiently spread.  This will be a shorter report, as the West wasn’t really where the “action” was in 2016.

We started yesterday with charts, and then moved to maps.  Today, we start with maps.

Although the West has shifted toward Democrats over the course of the past few decades, you wouldn’t know it by looking at the maps. Here is what it looked like in 1992: 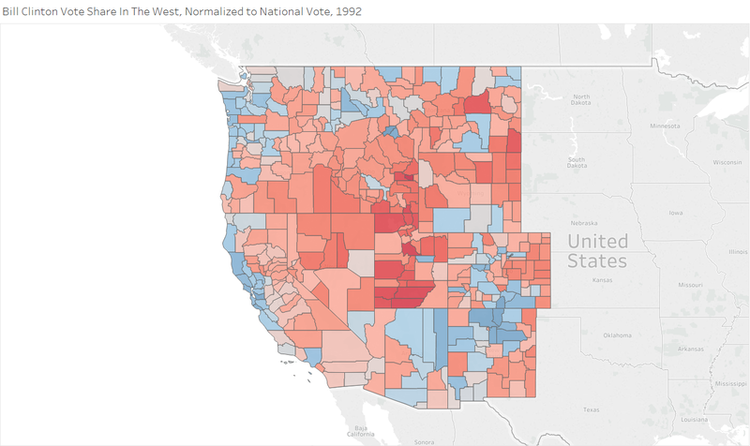 If you’re up on the political geography of the region, you can see the outlines of the Democratic coalition pretty well.  In New Mexico, it runs diagonally across the state, separating “Little Texas” from the northwestern portion of the state (which includes one of the oldest Hispanic communities in the country).  In Colorado, you see the familiar “C,” which links the historic Hispanic community in the southern portion of the state with liberal communities on the Front Range and in greater Denver. In the Pacific region, the coastal “grass belt” is distinct from the inland rural areas, although the north/south divide that marked California in earlier decades is still somewhat apparent.

Bill Clinton performed well in the region, winning Colorado, New Mexico, Nevada and Montana.  He came close in Arizona.  Many analysts believed that this was a function of Ross Perot’s strong showing in the area.  But it turned out that the Clinton coalition here had staying power. Nevertheless, the Democratic strength in rural areas pretty clearly receded, much as it had in the American South: 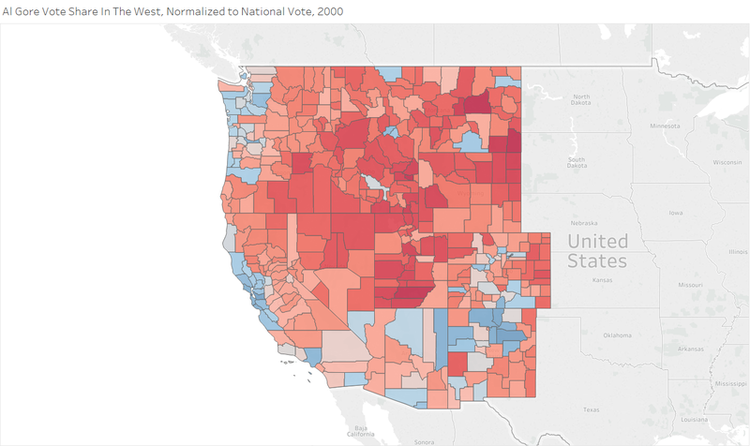 By 2004, the map still looks roughly the same, except the two regions grow increasingly distinct: 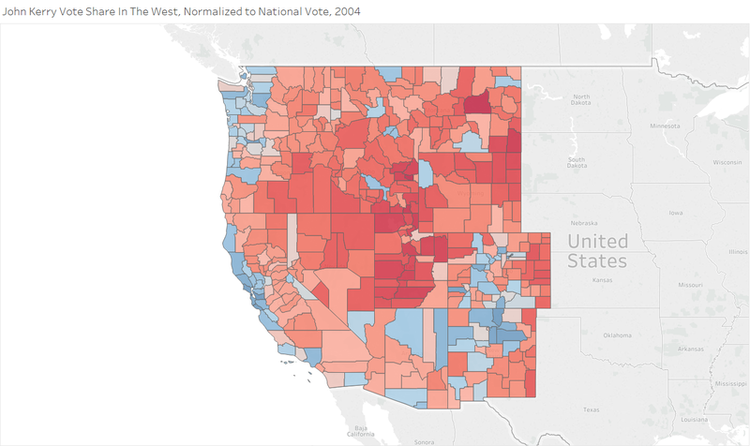 In 2008, we again see the same coalitions: coast vs. inland in the west, the “C” in Colorado, the diagonal in New Mexico: 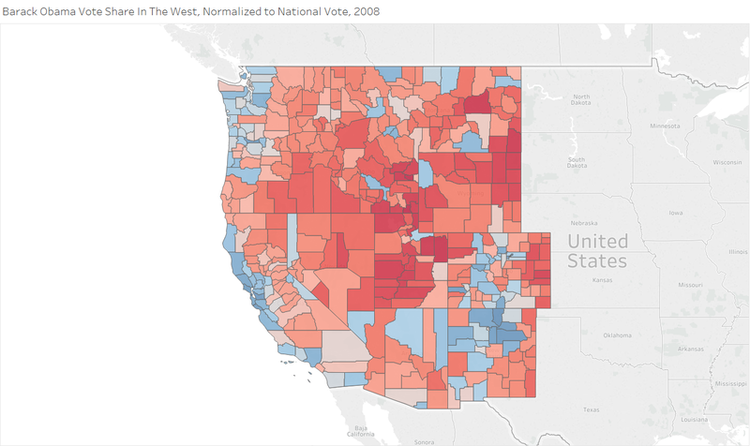 While 2012 shows yet more polarization: 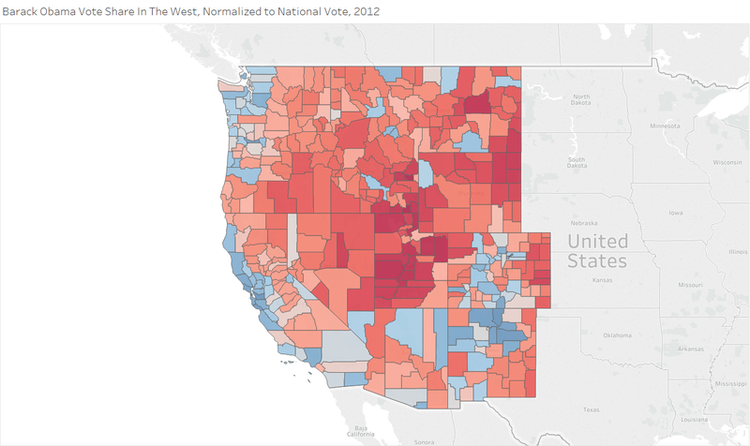 In conclusion here, 2016 looks a lot like 1992, except more polarized, and with Southern California trending toward Democrats: 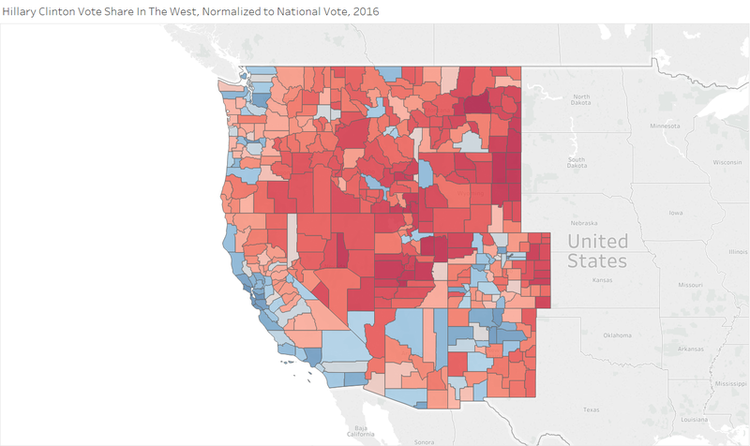 So the contagion in the Democrats’ coalition – growing weakness in rural and small-town America – did spread into the West.  You can see it at the congressional level; it is part of why Democrats lost seats in eastern and western Colorado; why Cresent Hardy was able to win in Nevada in 2014; why Martha McSally was able to hold on in Arizona in 2016.

If we look at shifts from 1996 to 2016, we see this all spelled out.  Again, you can pretty well match Democratic losses in the region against this map (as well as Republican losses in California): 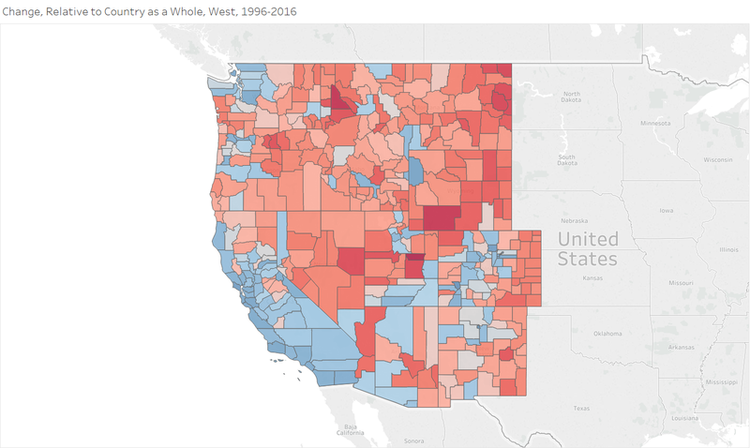 The charts show the same thing. We see that in the Mountain West, Democratic performance improved in large cities (much like in the South), while it has declined in rural and small-town areas (although not to the extent that it declined in the South).  This perhaps reflects the rural Hispanic vote in the area, which is plentiful: 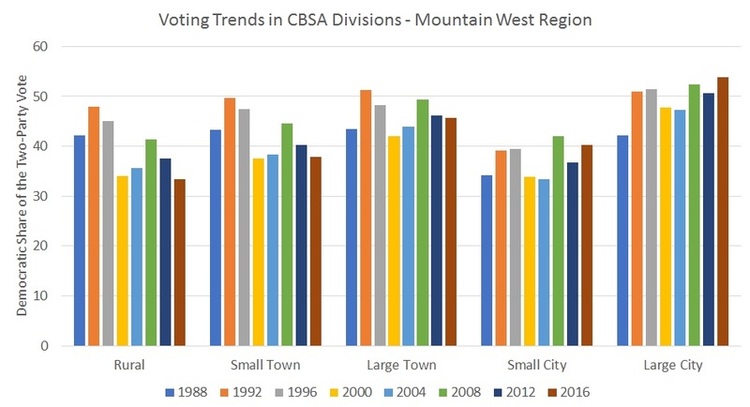 In the Pacific Division, it is a similar story: Increasing Democratic strength in the cities, decreasing strength in rural areas: 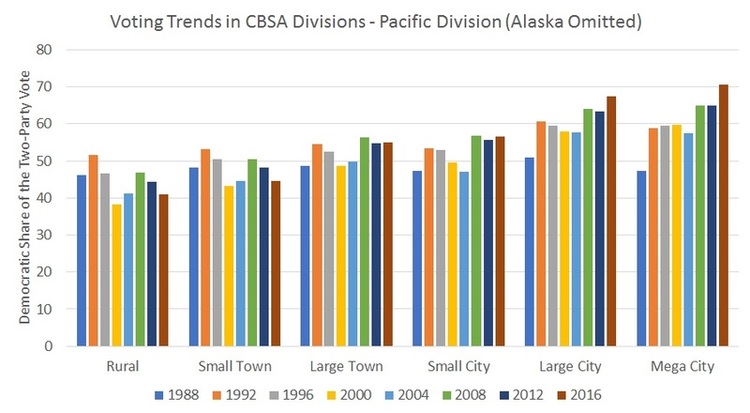 So if we see the same trends in the West as we saw in the South, why was the political story not the same?  The answer is that, as we saw yesterday, rural and small-town voters still cast a lot of votes in the South – majorities in some divisions. Moreover, the relative strengths of the different urban groups is fairly stable.

In the West, it is a different story.  As the original piece notes, many of these Western states can really be thought of as city-states. Around 80 percent of the vote in Nevada is cast in just two big-city counties: Clark and Washoe. Salt Lake County in Utah and Maricopa County in Arizona are other examples of this phenomenon.

We see this in the following chart: 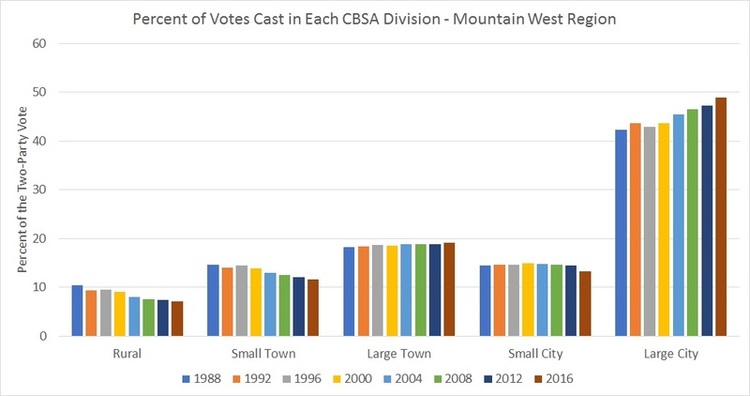 In the Mountain West, almost two-thirds of the votes are now cast in cities, as opposed to just over a majority of votes in 1988.  In the Pacific, this is even more pronounced: 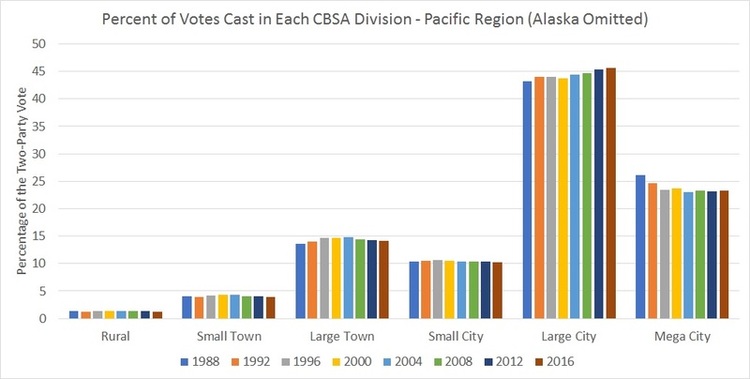 Almost 80 percent of the votes are cast in urban areas in the Pacific these days.