By Bob Davis and Gary Fields

This coal and steel region was thriving when Gary Martin started working construction sites in the mid-1970s. Ironworkers jammed the local union hall, the union sponsored a big picnic each spring, and business groups were flush with volunteers for charity drives.

Mr. Martin’s extended family attended church, as it had for generations, in an area called Irish Valley in neighboring Schuylkill County. Two-parent families were the norm, and fatal drug overdoses were so rare that some county coroners didn’t bother tallying them.

No longer. Working-class neighborhoods, in particular white ones hit hard by the decline of the U.S. industrial base, are crumbling under the weight of deepening social problems.

Mr. Martin, 63 years old, retired last year as head of Ironworkers Local 420 but financially supports three grandsons—22, 21 and 19—because his daughter became an addict. The oldest grandson turned to heroin, too, and Mr. Martin and his wife got divorced in another casualty of the stress, they say. 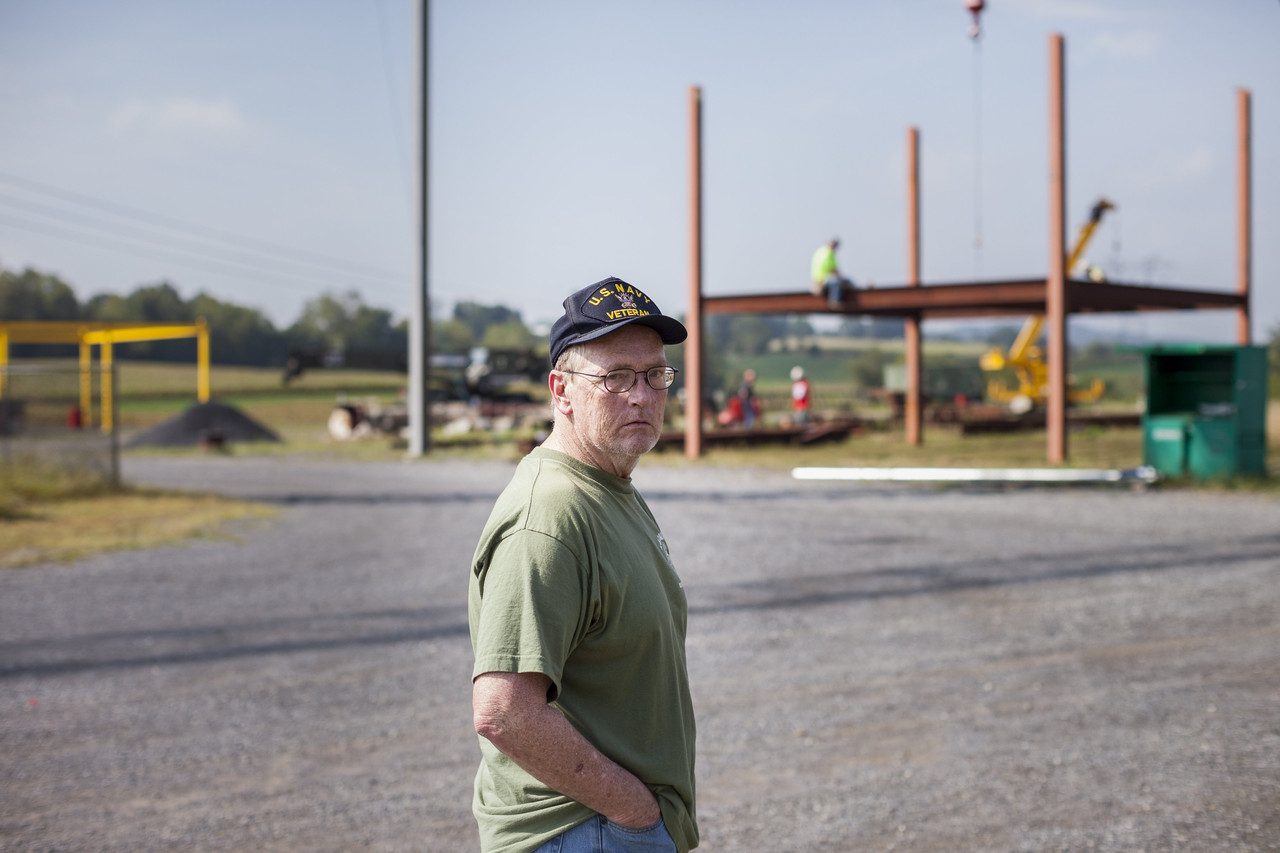 The buckling of social institutions fundamental to American civic life is deepening a sense of pessimism and disorientation, while adding fuel to this year’s rise of political populists like Donald Trump  and Bernie Sanders.

Here and across the U.S., key measures of civic engagement ranging from church attendance to civic-group membership to bowling-league participation to union activity are slipping. Unlocked doors have given way to anxiety about strangers. In Reading, tension between longtime white residents and Hispanic newcomers has added to the unease.

For Mr. Martin, social and economic setbacks led him to support Mr. Sanders, who he figured would stick it to the big businesses Mr. Martin feels have sold out working people. Other people here find resonance in Mr. Trump’s message that the U.S. has skidded so far off course that it needs to lock out immigrants and block imports to recover an era of greatness.

“When you lose the family unit and you lose the church community, you are losing a whole lot,” says Bonnie Stock, a retired teacher in Reading and Trump supporter, who says the church where she was baptized is dying from lack of young members. “People are looking at Trump because most of us see this [country] isn’t working,” she says.

Across the U.S., the Republican presidential nominee has his firmest support among the white working class. In the Republican primaries, he carried all but nine of the country’s 156 counties where at least 85% of the adult population was whites without four-year college degrees. Mr. Trump won 64% of the vote in Berks and Schuylkill counties, where noncollege whites were 66% of the adult population as of 2014.

In Berks County, once famous for the Reading Railroad stop on the Monopoly board game, social ills have been exacerbated by a 30% decline in manufacturing jobs and 6% fall in inflation-adjusted median income since 1995.

In 2014, 55.2% of the white women in Berks County who gave birth hadn’t finished college and were unmarried, up from 16.5% in 1980, according to Bowling Green State University’s National Center for Family and Marriage Research. Single mothers had a median income of just $22,378 in 2014, less than half that of the typical household in Berks County and the U.S. overall. 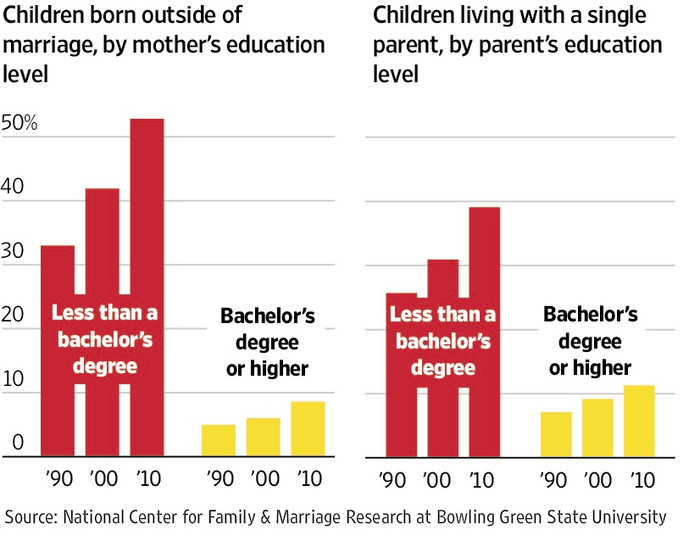 Gustave Meyer III, who oversees Lions clubs in Berks County, says members try to help some single parents with food, rent and utilities, but it’s tough because the district’s membership has declined 43% to 1,284 from 2,251 in the past 20 years, while the community’s needs have grown.

To attract new members, the Lions club district has done away with mandatory meeting requirements and waived initiation fees for veterans.

Ruth Gonzalez, 44, is getting help from the Lions Club in trying to renegotiate the two mortgages on her house, which is facing foreclosure. She fell behind on her payments because of mounting medical bills for her wheelchair-bound, 18-year-old son and repair costs for the van she uses to transport him.

She earns $11.75 an hour as a sewing-machine operator and is estranged from her husband.

The number of civic, professional and business organizations in Berks and Schuylkill counties declined to 131 in 2014 from 156 in 2000, according to Pennsylvania State University’s Northeast Regional Center for Rural Development. The number of unions and other labor groups fell to 29 from 41.

Some economists say the decline of institutions that fortify communities has a negative impact on household income. Without the strong support system from those networks, known as social capital, some people miss work more often during times of need, and their children have fewer extracurricular activities and other ways to get ahead.

For decades, Pottsville, a Reading suburb of about 14,000 people where the coal economy has evaporated, has relied on a volunteer fire department. Fire Chief Todd March says the number of active firefighters has shrunk to about 120 from 400 in 2000 because training requirements increased and stressed-out volunteers, juggling work and family demands, didn’t have time to fight fires.

About 15 years ago, five of the eight fire companies in Pottsville hosted annual block parties with amusement-park rides, beer and hot dogs to raise money and cement neighborhood ties. Now just one fire company is carrying on the tradition, Mr. March says.

“It’s hard getting volunteers, and people don’t have money to spend,” he says. 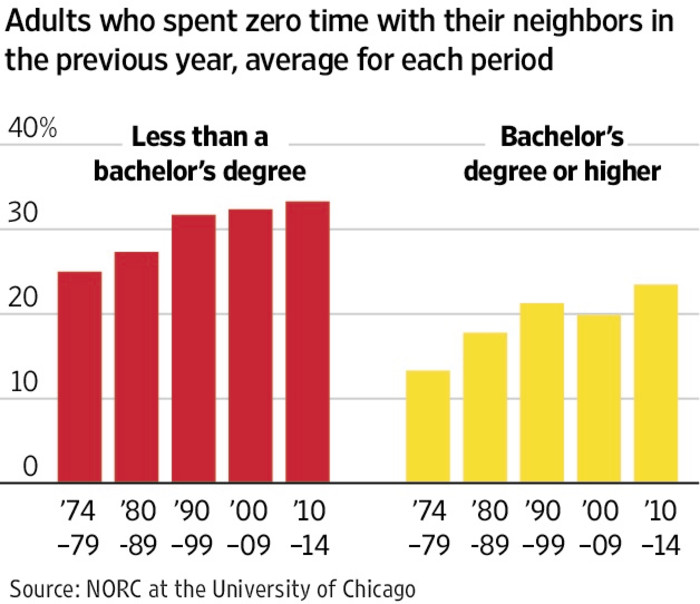 At Pottsville’s Kiwanis and Rotary clubs, membership is down by more than half since 2000. Three other Kiwanis clubs nearby have closed. Takeovers of local banks left fewer executives with the time for organized charitable efforts, say club officials.

Social problems in white working-class communities nationwide started to escalate in the 1970s. The number of single parents in those places rose, and so did divorces and the number of men who dropped out of the workforce, says Charles Murray, a political scientist at the conservative American Enterprise Institute, who has worked to quantify the decline of working-class America.

Those problems seemed to ease briefly in the late 1990s as the economy expanded and the crime rate dropped. President Bill Clinton and lawmakers revamped the U.S. welfare system in 1996 to focus more on jobs. The nationwide divorce rate stabilized, as did the percentage of children born to unwed mothers. Regular church attendance held steady.

That masked a constant decline in other barometers of the white working class. In southeastern Pennsylvania, longtime residents say they have become wary of their neighbors, especially as the percentage of Hispanics from outside the region has increased. In Reading, non-Hispanic whites are 25% of the city’s population of 88,000, down from 82% in 1980. Thousands of white Reading residents have moved to the suburbs.

Some people feel discombobulated by not knowing the newcomers, fear they are soaking up government benefits and think they are deepening the area’s drug problem, even though 83% of overdose deaths in Berks and Schuylkill counties last year were of whites, according to the Pennsylvania State Coroners Association.

Some whites and blacks still recall the 2005 raid of a Wal-Mart Stores Inc. distribution center under construction near Pottsville, where 125 workers from Mexico and Central America were arrested for working in the U.S. illegally. The incident left a sense among non-Hispanics that their community was under siege from outsiders. 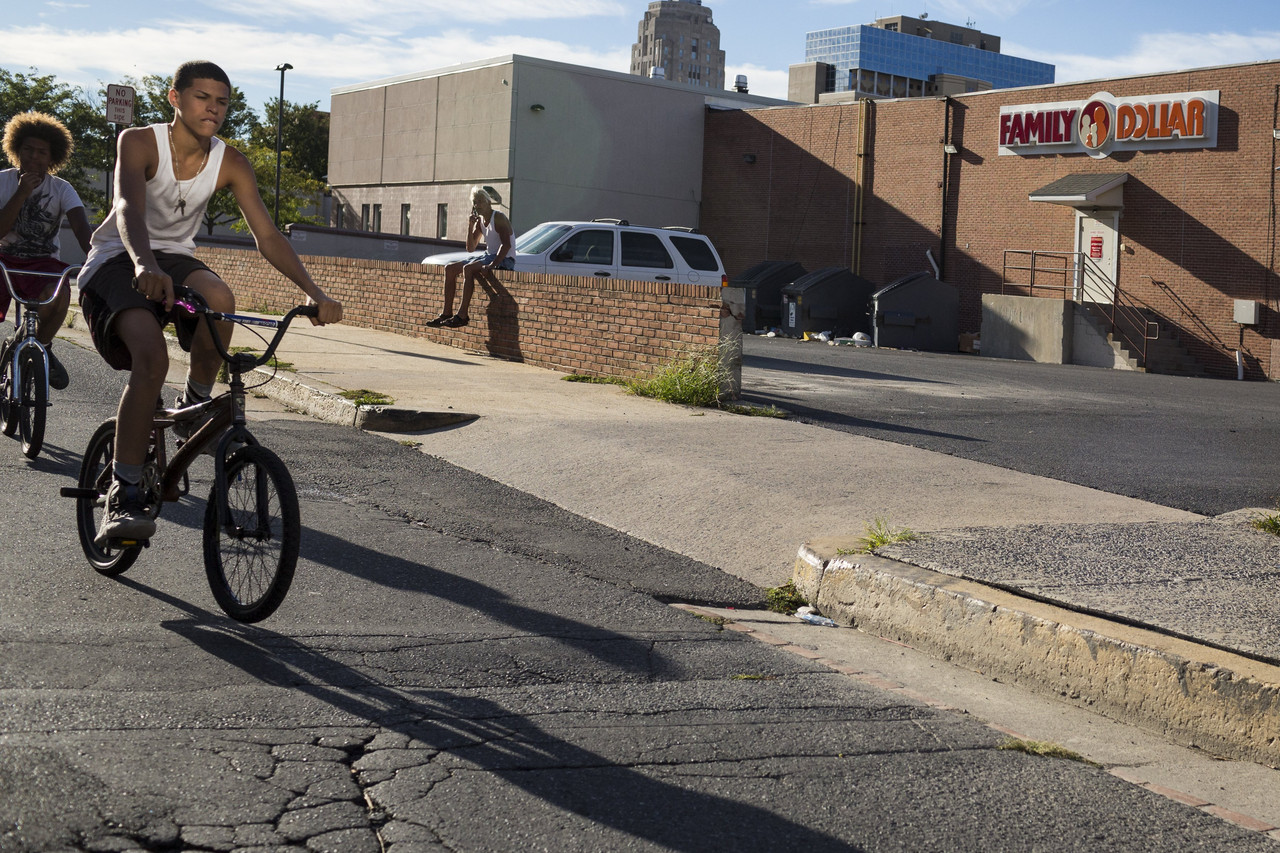 Non-Hispanic whites are 25% of Reading’s population, down from 82% in 1980. Thousands of white Reading residents have moved to the suburbs. Photo: Jesse Neider for The Wall Street Journal.

“There aren’t too many opportunities for jobs,” says Stanley Blair, 41, a warehouse laborer who used a day off to repair his house near Reading High School. “I walk out and I don’t hear English. It’s like I’m in a foreign land.”

Stephen Weber, 61, says he remembers Reading’s heyday when the shopping district on Penn Street was hopping and residents put on dresses and suits to shop. Vagrants now loiter there in the middle of the day. Mr. Weber says his neighbors in the 1960s and 1970s, including German immigrants, turned a gravel-filled lot into a neighborhood park and installed basketball equipment, monkey bars and swings.

Mr. Weber, a carpenter, moved to the Berks County suburbs. During visits to his old neighborhood, he sees the park often filled with trash and people sometimes buying and selling drugs, he says.

Many Hispanics have lived in the Reading area for decades, moving here for jobs as agricultural workers, and say they belong in the community as much as anyone else.

Some community groups try to bridge the gap between whites and Hispanics, but the results sometimes fall flat. Reading’s Downtown Improvement District co-sponsors free outdoor concerts during the summer, but a concert in August attracted a nearly white-only audience.

Evan Siegel, a former mortgage broker with two white teenage daughters and a Hispanic teenage stepson, says the two communities “don’t coexist socioeconomically.” He wasn’t surprised that Hispanics stayed away from the concert, which he described as “two white bands from the ’90s.”

Deepening the sense of alienation is the inability of Reading and nearby cities to stem their drug problems, especially overdoses of heroin and prescription drugs. Berks County had 69 drug-related deaths last year, triple the total in 2001.

Berks County Prosecutor John Adams says it is a rare day when police officers don’t have to respond to a drug emergency. They carry the overdose-reversal medication naloxone in their patrol cars.

Princeton University economists Anne Case and Angus Deaton say the surge in drug deaths and suicides among middle-aged whites nationally began around 2000, when the economy fell into recession, Chinese imports began to surge and manufacturing jobs started to decline sharply.

Laid-off workers turned increasingly to Social Security disability payments and got prescriptions for painkillers to treat back pain from years of factory work. Mr. Deaton, who won the Nobel Prize in economics in 2015, sees a “strong correlation” between declining employment locally and deaths from suicide, drugs and alcohol.

Dozens of prayers are scribbled in ink on poster boards at St. John’s German Lutheran Church in downtown Reading, imploring spiritual help for jobs, a chance to finish school or escape from the ravages of drugs.

“Pray for my aunt’s addiction,” said one prayer. Another: “I pray that my dad overcomes his addiction.” And another: “Pray for Harrisburg and Reading.”

Like churches across America, those in Reading face declining attendance, particularly among younger and less-educated people. In 2014, about 26% of Americans surveyed by the University of Chicago’s General Social Survey said they don’t attend religious services, up from 9% in 1972.

Michael Kaucher, executive director of Reading Berks Conference of Churches, estimates that 75% of the area’s population don’t belong to a church. Millennials are less likely to attend church, and young families shuttle their children to sporting events rather than Sunday school.

Churches often rely on a concentrated cadre of volunteers. Fewer members means fewer people who can help out in the surrounding community.

The First United Church of Christ, founded in Reading in 1753, had 700 members in the 1960s. Last year, 70 was a good crowd, and there have been fewer than 30 on some recent Sundays. The congregation is deciding whether to shut down.

In Pottsville, former heroin addict Travis Snyder, 34, leads a volunteer drug-recovery group called “The Skook Recovers,” using a nickname for Schuylkill County. Along with two dozen other recovering addicts, Mr. Snyder picks weekly community projects, such as cleaning up parks, organizing antidrug marches and speaking at high schools. Participants crave a sense of community, he says, which gives them a way to contribute to a place that might otherwise dismiss them as failures.

“We pick up trash and make things look pretty,” Mr. Snyder says. “You don’t need a college degree for this; you don’t need a lot of skills. But you’re getting together with people you don’t know to bring about a common purpose.”

Write to Bob Davis at bob.davis@wsj.com and Gary Fields at gary.fields@wsj.com