Comments by Trump have escalated tension, sparking a nationalist backlash south of the border Mexico had a closed and struggling economy in the mid-1980s, with little American investment, and most Mexicans viewed the U.S. as their historic enemy. After Mexican drug lords tortured and murdered a U.S. Drug Enforcement Administration agent, President Ronald Reagan temporarily closed the border.

Much has changed in the ensuing 30 years. Under the North American Free Trade Agreement, the two countries trade half a trillion dollars worth of goods and services each year. There is cooperation on security, migration and the environment. Wal-Mart Stores Inc. has become Mexico’s largest private-sector employer. Americans couldn’t make enough Super Bowl guacamole without Mexican avocados.

President Donald Trump’s vows to move quickly to renegotiate the Nafta accord, build a wall along the border and crack down on immigration are testing those bonds. He has said the alliance fostered by his four predecessors, two Republicans and two Democrats, has undermined America’s economy by encouraging U.S. manufacturers to relocate jobs south of the border, and its security by what he calls lax enforcement of immigration restrictions.

The U.S. trade deficit with Mexico, he notes, has increased. Mexico “has outnegotiated us and beat us to a pulp through our past leaders,” he said on Jan. 27. “They’ve made us look foolish.” On Thursday, he told U.S. lawmakers he is aiming to “kick-start” the Nafta renegotiation process.

The escalating tension has called into question whether the friendliness of the past three decades will endure, or whether the two neighbors will revert to the hostility common during the first 170 years of U.S.-Mexican relations. Much will depend on whether early signs of a working relationship between lower-level officials will overcome President Trump’s propensity to rile the Mexican government. 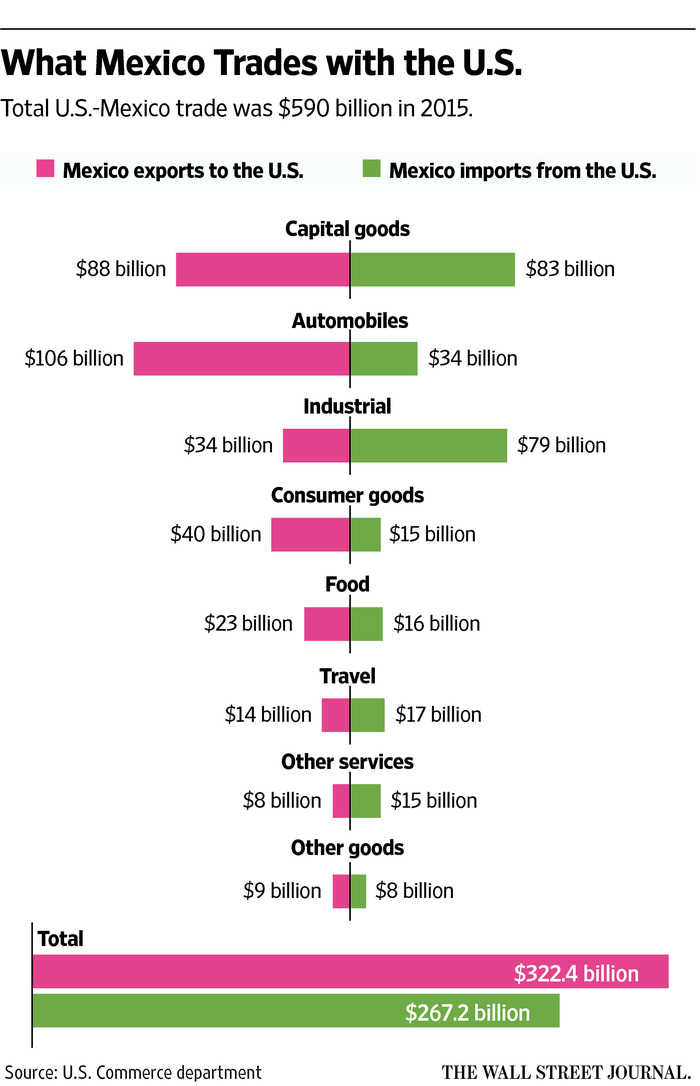 The confrontation is sparking a nationalist backlash in Mexico not seen in years. Mr. Trump’s insistence that Mexico pay for the proposed wall—a demand seen as an insult in Mexico—prompted the normally mild-mannered Mexican President Enrique Peña Nieto leader to call off a planned visit to Washington. “This is not a negotiating strategy,” Foreign Minister Luis Videgaray told a Mexican broadcaster. “This is a limit we are not going to cross because it’s about Mexican dignity.”

A recently trending Twitter hashtag was #Fuera Starbucks, or Starbucks Out, referring to the American coffee chain that has opened hundreds of shops across Mexico. The flare-up is stoking support for populist leftist Andrés Manuel López Obrador, an early front-runner in next year’s presidential election, who has branded Mr. Trump’s actions “foreign aggression” and declared “the fatherland is first.” A recent poll showed 59% of Mexicans think relations with the U.S. are bad or very bad, compared with 13% two years ago.

Mr. Trump’s approach to Mexico is an early test for his foreign policy—one that gives primacy to trade and promises to rethink longstanding alliances and assumptions. How the confrontation with Mexico plays out could affect how the Trump presidency takes on other challenges overseas, especially in trying to redress a trade imbalance with China.

“Trump inherited an inbox of foreign policy problems that could be described as daunting,” said Richard Haass, president of the Council on Foreign Relations who formerly worked in George W. Bush’s State Department. “What he has done with Mexico and China is add to that inbox.”

Mr. Trump formally announced his plan to go ahead with the border wall on the same day that high-ranking Mexican officials arrived in Washington for talks on how to proceed with the bilateral agenda. The timing was seen in Mexico as a diplomatic slap in the face.

A White House official said, “President Trump and his team continue to have productive meetings on a wide range of issues with officials from Mexico.”

Aides to both leaders set up another phone call for that Friday to smooth things over. Both sides agreed not to discuss the issue of payment for the wall publicly. Mr. Trump was quoted as saying Mexico wasn’t doing a good job tackling drug gangs, whom he called “bad hombres,” angering many in a nation that has lost hundreds fighting cartels.

Mr. Trump says his tough stance on trade, immigration and the border wall will help, not hurt, ties between the two countries. “By working together on positive trade, safe borders and economic cooperation, I truly believe we can enhance the relation between our two nations to a degree not seen before in a very, very long time,” he said when announcing his actions. “I think our relationship with Mexico is going to get better.”

Michael C. Camúñez, chief executive of Washington consulting firm ManattJones Global Strategies and a former U.S. assistant Commerce secretary in the Obama administration, said that “despite the rhetoric, there’s actually a plausible scenario in which the U.S.-Mexico relationship could ironically emerge even stronger, commercially speaking, under a Trump administration because of the political willingness to actually get to the table and strengthen and improve the Nafta agreement.”

Mexican sensitivities about American slights are studded throughout the history of the bilateral relationship. The seminal event in Mexican history is the 1846-48 Mexican-American War that led the U.S. to take more than half of Mexico’s land. Mexico’s late 19th and early 20th century dictator Porfirio Díaz famously said: “Poor Mexico, so far from God and so close to the United States.”

Behind-the-scenes maneuvering by an American ambassador helped lead to the 1913 assassination of Mexico’s first democratically elected leader. That event intensified the Mexican revolution, when some 700,000 died. Democracy didn’t return for nearly 90 years.

Yet Mexico never fully turned against its northern neighbor. It rebuffed a German attempt to enlist Mexico against the U.S. in World War I in exchange for the return of Mexico’s old lands. In World War II, Mexico declared war on Axis powers and sent a fighter squadron to the Pacific to fight the Japanese.

After the war, Mexico closed off its economy to the outside world. “Made in Mexico” became paramount. Mexico stayed on the sidelines of the Cold War. Mexican schoolchildren grew up reading textbooks that highlighted the historic danger the U.S. posed to their country.

By the early 1980s, an inward-focused economy had run its course. Periodic financial crises rocked the country, threatening its stability, and millions of Mexicans headed to “El Norte”—one of the biggest waves of human migration in recorded history. Mexico’s government began slowly opening the economy.

In 1988, then-President Carlos Salinas, who had been educated at Harvard, decided to advance the free-market opening by seeking strategic partnerships with more advanced economies. He has said the indifference he encountered on trips to Japan and Europe made him realize that Mexico’s future was with the U.S.

American leaders responded quickly and enthusiastically. “We wanted a stable neighbor,” says Carla Hills, who launched the Nafta negotiations as President George H.W. Bush’s trade representative. She compares it to the Marshall Plan, calling it an “activity of self-enlightenment” for the U.S. to create a less troublesome state on its border.

Mexico signed more free-trade deals than any country in the world. Nafta and trade helped stabilize its economy following the 1994-95 peso collapse and eventually helped pull millions out of poverty. The pact forced Mexico to embrace investment rules and protections demanded by Western companies, opening its economy to a flood of foreign direct investment. Mexico also became a full democracy after Nafta began.

The Nafta era largely erased anti-Americanism, one of the foundations of the nationalist PRI regime which ruled from 1929 until 2000, and returned in 2012 under Mr. Peña Nieto.

“Nafta has created a mentality in younger Mexicans that the gringos are not our enemies,” says Armando Santacruz, 55, president of a Mexican company that distributes chemicals throughout Latin America. “Every day, Mexicans had less of a chip on their shoulder. It was all: Let’s get down and do business, Mexicans and gringos.”

In a 2015 survey of attitudes around the world toward the U.S., the Pew Research Center found one of the biggest generation gaps in Mexico: 74% of Mexicans between the ages of 18 and 29 had a favorable view of the U.S., compared with 55% among those age 50 or older.

Over the past decade, U.S. law enforcement and military authorities have helped train their Mexican counterparts to fight drugs and organized crime—a once-unthinkable collaboration given historical sensitivities. U.S. military and intelligence agencies share information with Mexican counterparts to fight drug trafficking and terrorism. In 2016, Mexico deported close to 150,000 non-Mexican immigrants headed to the U.S.

Despite those ties, U.S.-Mexico relations have been a sensitive subject for some Americans suspicious of the impact of Mexican exports and immigrants on the U.S. economy and on their communities, even as the number of illegal immigrants crossing the border has dropped in recent years. From the start of his presidential campaign, Mr. Trump made a point of speaking to those voters’ concerns in blunt terms.

Even Nafta advocates acknowledge job loss from the pact. In a 2014 report, the Peterson Institute for International Economics put the annual net U.S. job loss from trade with Mexico at 15,000, while also citing research arguing that the offsetting benefit to the U.S. economy was several hundred thousand dollars for each lost job.

Some Mexicans view Mr. Trump as a blip in the increasing integration of North America. Cross-border supply chains in industries such as autos will make unwinding commercial ties costly and complicated. Some 4.9 million U.S. jobs are linked to exports to Mexico, the U.S.’s second-biggest export market, according to a recent estimate by the Wilson Center, a nonpartisan think tank in Washington. There are more than 160 million Mexicans and Mexican-Americans in North America.

Just as Mexico was beginning to view itself more as North American than Latin American, it feels to many in Mexico as if the U.S. wants to kick it out of the neighborhood. Mr. Trump’s emphasis on building a wall—a fence already exists along much of the border—sends a pointed message to Mexicans, says Lorenzo Meyer, a leading Mexican historian.

“The idea, which had been accepted in Mexico, that we were a part of—a poor part of, but part of—North America has been destroyed,” says Mr. Meyer. “Trump is saying, we have changed the definition of who belongs in North America, and it’s just us and Canada.”