Miami-Dade County has been a vote-production machine for the Democratic Party in Florida.

The biggest county in the nation’s biggest swing state, it supplied President Barack Obama with a lead of more than 200,000 votes in 2012, an important boost in a state he carried by fewer than 75,000.

To blunt the Democrats’ edge, Republicans need to attract more of the county’s many Hispanic voters, such as 36-year-old Diego Vásquez. But GOP nominee Donald Trump’s anti-immigrant rhetoric and shifts within the Latino electorate are making that task more difficult. The results from the Nov. 8 election will indicate how much more difficult.

Mr. Vásquez is a registered Republican, but he twice voted for Mr. Obama. Mr. Trump’s incendiary remarks about immigrants threaten to cement his unhappiness with the GOP.

Mr. Vásquez, a naturalized citizen from Colombia, is a testament to the changing face of the electorate in Miami-Dade, where 67% of residents are Hispanic. Once dominated by conservative Cuban-Americans, the Hispanic community has turned more Democratic as young voters of Cuban heritage come of age and new waves of immigrants arrive. 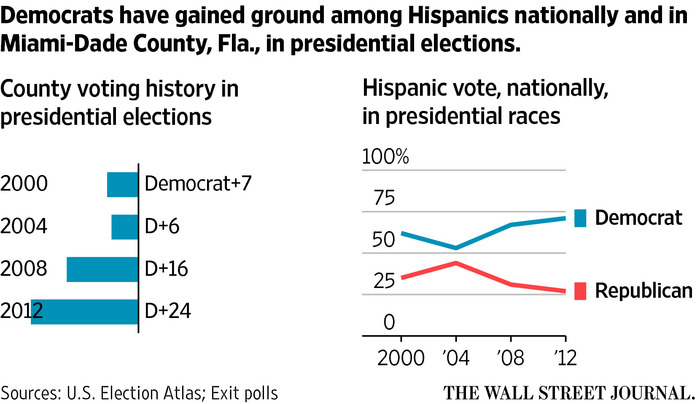 If Republican Sen. Marco Rubio is re-elected, the native Miamian could help the GOP gain a stronger foothold among Hispanic voters. Mr. Rubio, whose story as the son of Cuban immigrants is central to his campaign narrative, ended his bid for the GOP presidential nomination after losing the Florida primary to Mr. Trump.

“The party has to figure out how to attract Hispanics and listen to their issues,” he said.

Mr. Vásquez also voted for Mr. Rubio while choosing Mrs. Clinton over Mr. Trump for president. He said Mr. Rubio can help make the GOP more welcoming to immigrants, even though the senator retreated from a broad immigration-overhaul proposal he helped craft in 2013.

“If he manages to change that,” Mr. Vásquez said of the GOP stance on immigration, “the Republican Party could again rise and reclaim the strength it once had.”

Many Republican leaders say that Mr. Trump’s candidacy has signaled that the party must connect more firmly with his core supporters, most of them white and many of them working-class, but that the party must also find a way to reach out to the growing blocs of Hispanic and minority voters.

“There were some voices in the Republican Party this year who were very loud in proclaiming that Republicans didn’t need Hispanic voters in order to win,” said Whit Ayres, a GOP pollster who worked on Mr. Rubio’s unsuccessful presidential campaign. A loss for Mr. Trump, he said, “will put the lie to that argument.”

While Mrs. Clinton is well ahead of Mr. Trump among non-Cuban Hispanics—67% to 15%—in the Bendixen & Amandi survey, Mr. Trump edges Mrs. Clinton out among those of Cuban descent—47% to 41%. Some polling suggests that Mr. Trump is on track to win a third or more of Florida Hispanics, compared with the 39% that 2012 GOP nominee Mitt Romney carried.

At a recent gathering of young Hispanic Republicans at Biscayne Bay Brewing Company in Doral, Isis Pacheco, a Cuban-American attorney in her early 30s, said she planned to vote for Mr. Trump. “I believe in his message” of lowering corporate taxes and nominating conservative Supreme Court justices, she said.

Miami-Dade County was transformed by decades of Cuban migration after Fidel Castro seized power on the island in 1959. With staunch anticommunist views, many of these immigrants revered former President Ronald Reagan and became steadfast Republicans.

But the Cuban-American population has undergone profound changes. The second and third generations tend to be more liberal, according to surveys.

And Cubans’ share of the county’s overall Hispanic population has decreased, to 53% in 2015 from 59% in 1990, as Latinos of Caribbean, Mexican and Central and South American descent streamed in.

The arrivals have remade the county’s tapestry. Little Havana, once the heart of the Cuban exile community, now teems with eateries serving dishes such as Honduran baleadas, similar to tacos, and Salvadoran pupusas, tortillas with fillings. Doral, a fast-growing city near the Miami airport that is home to one of Mr. Trump’s golf resorts, has become such a magnet for Venezuelans that some locals jokingly call it “Doralzuela.”

One of them is Ricardo Sánchez, a 52-year-old real-estate agent registered without party affiliation. He backed Mr. Obama in 2012 but has voted for Republicans for some offices. This year, his dislike of Mr. Trump prompted him to vote across the board for Democrats.

“I am imposing a sanction on Republicans,” he said. “It’s sad, because it’s a great party.”