President Barack Obama ’s move to offer legal-worker status to several million undocumented immigrants will send unpredictable ripples through the U.S. economy, prompting many to seek higher-paying jobs and heightening competition for positions in a number of sectors, economists say.

Those studying the potential impact of the president’s executive order, which he announced on Thursday night, point to the Reagan-era 1986 Immigration Reform and Control Act, which allowed about 1.7 million undocumented immigrants to become lawful permanent residents and roughly one million farm workers to apply for a higher level of legal status.

The 1986 law, which was more legally far-reaching than Mr. Obama’s move, had an almost immediate labor-market impact, according to government research and studies conducted by a number of economists, sociologists and demographers.

Federal data showed that immigrants in farming and sales jobs were the most likely to move to higher-paying work in different industries.

By the time they became naturalized in the early 1990s, just 4% of farm workers were in the same industry, while roughly a quarter of those workers had shifted over to construction and other laborer jobs with better pay, according to a study published in 2002 by the federal agency that handled immigration policy.

Other workers, though, were less likely to move. One-third of undocumented immigrants who worked in service-sector or professional, managerial and technical jobs stayed in their sector even after becoming naturalized.

Economists and politicians have widely different views on what impact Mr. Obama’s executive order will have on the labor market and the economy, with much depending on the details he puts forward.

Supporters of an immigration overhaul estimate that granting legal status will bring more workers into the tax system and boost government revenue, but many critics have said that it will overwhelm social-welfare programs and displace numerous workers. They can point to numerous contradictory studies that support both claims.

Competing forecasts also have been based on projected tax and revenue impacts of past failed efforts to rewrite immigration rules in 2006 and 2013, conclusions with little relevance to the White House’s likely actions.

The 1986 law offers the most concrete findings, in part because it was the last time a large number of undocumented workers gained legal status and immediately filtered into the workforce.

“It’s reasonable to conclude that unauthorized status damages earnings power, and that’s why you see a wage increase,” said Lindsay Lowell, director of policy studies at Georgetown University’s Institute for the Study of International Migration. “But it’s not clear it’s across-the-board for all unauthorized workers.”

Sherrie Kossoudji, an associate professor in the school of social work at the University of Michigan, studied the 1986 law’s impact and said it led many immigrants to quickly search for better work.

As an example, she cited immigrants who worked in restaurant kitchens, unable to move to higher-paying work before the law was passed.

“Once you have legal working papers, you can move to the front of the restaurant,” she said. “You can get a better job if you have an employer who is paying wages that are not acceptable. You have mobility.”

Her research found wages for naturalized immigrants were 6% higher than they would have been without legal status.

In a new estimate from the Washington-based Migration Policy Institute, roughly 18% of the 8.2 million undocumented workers age 16 and older work in hospitality-related fields, 16% work in construction, 12% work in manufacturing and 9% in retail jobs. 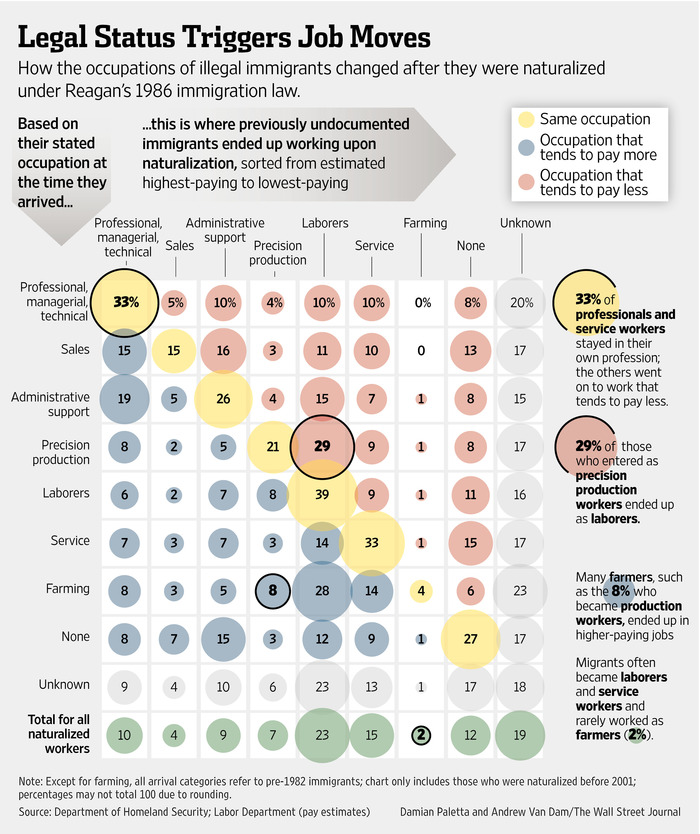 Randy Capps, the MPI’s director of research for U.S. programs, said some sectors could see more job competition than others after the White House’s program is implemented. Many undocumented immigrants have recently steered away from manufacturing jobs and employers like meatpackers, fearing raids from immigration officials.

“Opening up more opportunities with a work permit could definitely result in some competition,” he said, saying that employers will have a larger supply of workers to choose from.

Economists are divided, though, on what that competition looks like. George Borjas, a Harvard University labor economist, estimated in a paper for the Center for Immigration Studies, a right-leaning research group, that a 10% increase in the size of a “skill group” would lower “the wage of blacks in that group by around 2%” and U.S.-born Hispanics by as much as 4%.

Asked to weigh in on the potential impact of the Obama administration’s plan, Mr. Borjas declined, saying, “It’s healthier to stay out of the crossfire.”

Mr. Lowell, of Georgetown, predicted the economic changes might be profound for people who secure legal status but more negligible for others and particularly the broader economy.

“You’re talking about 2% to 3% of the workforce, and this workforce that has an average nine years of education,” he said. “There can be a lot of hyperbole on both sides.”

By the time many of the workers under the 1986 law were legally naturalized in the early 1990s, they saw wage gains of between 5% and 16%, compared with what they would have earned without legal status, researchers have found.

Obama’s Debt Boom is The most predictable crisis in history