Recent polls show a surprisingly tight race in Texas between Donald Trump and Hillary Clinton, and a surge in registered voters is adding to one of the election’s great unknowns: Could the presidential race end up being unusually close in the reliably red Lone Star State?

A record-breaking 15.1 million people are now registered to vote in Texas, an increase of more than 1.45 million since the 2012 election, according to Secretary of State Carlos Cascos. 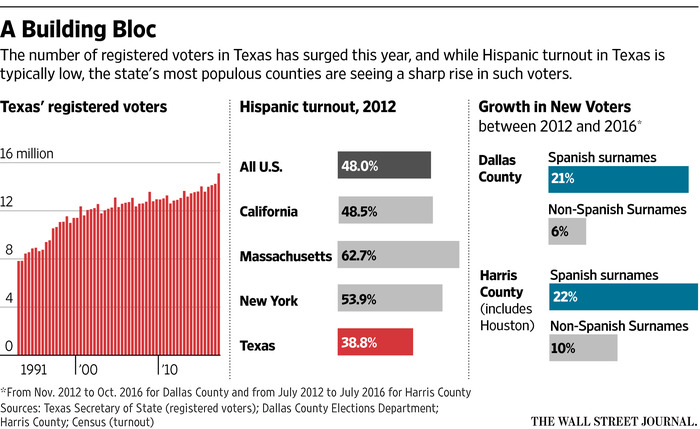 Texas doesn’t register voters by party, so it is unclear which party benefits the most. Mr. Cascos said that aside from population growth, the leading factor in the tide of newly registered voters appears to be increased interest in the presidential election.

“The only thing we can glean from this data is that the newly registered voters are disproportionately Hispanic,” said Mark Jones, a political-science professor at Rice University. But he said “there’s also an increase in non-Hispanic voters.”

Some of the new voters could be people who registered “specifically to oppose Trump or people brought into the political process by Trump and who will support him,” Mr. Jones said.

Recent polls show Mr. Trump’s lead here has narrowed, prompting Real Clear Politics, which averages polling, to move Texas into the tossup column. Political experts still expect the Republican nominee take the state, but say discontent with him among Texas conservatives, combined with a continuing push from Mrs. Clinton’s Democratic backers to tap Hispanic voters, could make the margin slimmer than usual for the GOP.

In Harris County, which includes Houston, the number of registered voters with Spanish surnames increased 22% between July 2012 and July 2016, numbers compiled by the county clerk show. Those with non-Spanish surnames grew only 10% over the same period. Similar figures were reported in Dallas County.

A Wall Street Journal analysis found Texas counties with significant voter increases don’t appear to be fertile ground for Mr. Trump, because of their large populations of Hispanics and college-educated voters, two challenging demographic groups for him.

“In the past, we had to explain to people why it was important to vote. It was always a struggle,” said Carlos Duarte, state director for Mi Familia Vota, a group that focuses on registering Hispanic voters and is operating extensively in Houston, Dallas and San Antonio. “But this year, not at all.”

Still, Hispanics have historically voted at lower rates in Texas compared with nationally. Just 39% of eligible Hispanic voters there cast ballots in the 2012 presidential election, compared with about 48% in the rest of the country, census data showed.

Republicans Are Trying to Suppress More Than Votes