A better insight into how Hispanic voters view Mr. Trump, and a Republican Party that is taking an increasingly hard-line and intolerant approach to immigration, comes from a recent Telemundo/Wall Street Journal/NBC News poll. Three out of four (75%) Hispanics view Mr. Trump negatively, and the favorability ratings of two other leading Republican candidates–both of whom are Hispanic–have eroded during the campaign.

In July 2015, Marco Rubio had a net positive personal rating among Hispanics: 28% viewed him positively; 21% viewed him negatively. In February, Mr. Rubio was net negative by 15 points: 25% positive, 40% negative. 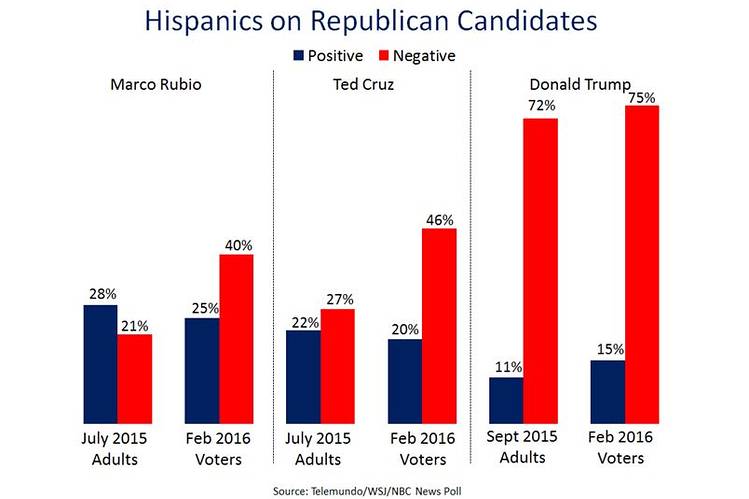 Many had expected that Mr. Rubio and, to a lesser extent, Mr. Cruz would have an advantage in connecting with Hispanic voters and would come close to matching the 44% share of the Hispanic vote that George W. Bush won in 2004. But neither has shown signs of being able to reach that level of support, and Hispanics are more likely to disagree than agree with the suggestion that Mr. Rubio or Mr. Cruz really cares about people like them.

Conversely, the Telemundo/WSJ/NBC poll found that 71% of Hispanics agree that Bernie Sanders really cares about people like them; 62% said this is the case for Hillary Clinton. Donald Trump has proudly reminded audiences during debates and rallies that immigration would not be discussed so much if not for him, but the GOP might come to wish that Mr. Trump had kept quiet. Instead of standing up to Mr. Trump on immigration, many Republican candidates, seeking to curry favor with primary voters, have shifted closer to his harsh plans. It is debatable whether this has helped their standing among the GOP base. In exit polls across Super Tuesday states, Republican primary voters ranked immigration their least important issue, behind the economy, government spending, and terrorism. But GOP politicians’ shift toward intolerance has hurt their standing with Hispanics and raises questions about the Republican nominee’s ability to appeal to enough Hispanics to win the White House. It is looking more likely that, come November, whomever the Republican Party nominates, it will be the GOP, and not Mexico, footing the bill for Donald Trump and his really big wall.

Why Jeb Bush Is No Mitt Romney