The House should pass a bill pairing spending cuts with a dollar-for-dollar debt-ceiling increase.

President Obama says he won’t negotiate with Republicans over his proposed more than $1 trillion increase in the debt ceiling as a matter of principle because Congress “should pay the bills that they have already racked up.”

Set aside the obvious—that he championed the spending and signed the measures that racked up the bills, which Republicans opposed. There may be no person in America with less moral authority than Mr. Obama on this issue. Six years ago he led a Democratic effort to defeat a $781 billion debt-ceiling increase.

On March 16, 2006, Illinois’s junior Sen. Obama argued on the Senate floor that raising the debt limit was “a sign that the U.S. government can’t pay its own bills.” He complained that “Washington is shifting the burden of bad choices today onto the backs of our children and grandchildren,” and added, “America has a debt problem and a failure of leadership.” 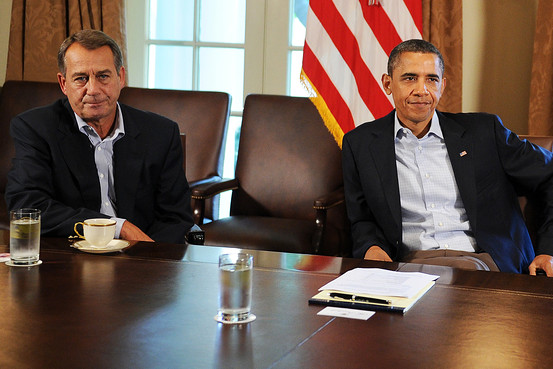 Mr. Obama has since expressed semi-regret for his 2006 comments. He told ABC’s George Stephanopoulos last April, “I think that it’s important to understand the vantage point of a senator versus the vantage point of a president. When you’re a senator . . . this is always a lousy vote. Nobody likes to be tagged as having increased the debt.” He acknowledged that was “making what is a political vote as opposed to doing what was important for the country.” But as president, the newly enlightened Mr. Obama said, “you start realizing . . . we can’t play around with this stuff.”

The experience didn’t leave Mr. Obama with greater humility. Instead, this New Year’s Day he tartly said, “We can’t not pay bills that we’ve already incurred.” Who is suggesting we don’t? Not House Speaker John Boehner and Senate Minority Leader Mitch McConnell, or any other Republican leader. Quite the opposite. They want to cover the cost of the existing debt while cutting spending to prevent a fiscal catastrophe.

Mr. Obama’s use of straw-man arguments to misrepresent the GOP’s position became tiresome long ago. He does this in part because he can get away with it, thanks to a compliant press corps. His reliance on the tactic may also spring from his recognition that he has a weak case and cannot win the argument otherwise.

For their part, Republicans finally appear reasonably united around something practical and reasonable—the “Boehner Rule,” named after its author. It requires matching any debt increase dollar for dollar with spending cuts. Here, the GOP will likely find wide public support.

For example, in December 2012 76% of respondents in a Battleground Poll favored across-the-board spending cuts and 73% in a Rasmussen survey believed government should cut spending rather than increase it. In a September 2012 Public Notice Poll, 74% did not believe federal spending has helped the economy, while 86% said it has not helped their own personal situation.

The GOP congressional leadership is right to say that they will not negotiate in private with Mr. Obama, and that tax increases are not on the table, especially after the president received $620 billion in new taxes to end the “fiscal cliff” crisis.

But this means House Republicans must pass a measure pairing specific spending cuts with a debt-ceiling increase that will have few, if any, Democratic votes. It would therefore be tactically wise for Republicans to draw many of these cuts from the recommendations of Mr. Obama’s own National Commission on Fiscal Responsibility and Reform (aka Simpson-Bowles).

It would be even better if much of the savings were achieved by moderating future spending increases or freezing outlays, rather than reducing them from today’s levels. Both are possible: Congressman Paul Ryan’s proposed budget plans—approved by House Republicans in 2011 and 2012—achieved most of their savings by restraining future growth.

Passing such a measure will require the GOP to accept less than total repeal of the Obama agenda, vote for spending cuts smaller than what they want, and support a debt increase all Republicans wish were not necessary. Republicans voting against a GOP plan because it’s not perfect would just be aiding and abetting Mr. Obama.

With control of just one chamber, Republicans won’t be able to advance much-needed structural changes in entitlements. That’s the cost of losing the 2012 election. A Republican wish list will have to await a GOP president and Congress.

For now, Republicans must make Mr. Obama take ownership of his deficits and the debt (which has increased from $10.626 trillion the day he took office to $16.433 trillion on Wednesday). It’s impossible to negotiate with an ideologue, but Republicans can systematically unmask him and constrain him as much as their limited power allows, if they are united and acting in concert.