Joshua Wyner makes the case that it’s an investment worth making. Monica Herk argues it’s a wealth transfer without benefit One of the most sweeping proposals in President Barack Obama’s State of the Union address this year was his call to make community college free for millions of students.

The plan—in which the president proposed having the federal government cover 75% of the cost of tuition and states pay the rest—was aimed at increasing access to college in an era when most good jobs require some postsecondary education and many employers say they struggle to find workers with the skills they need. But at an estimated cost of $60 billion over 10 years, the proposal was controversial and given no chance of advancing in a Republican-controlled Congress.

Some argue that free community college would be a huge and costly entitlement with little return on investment. At about $3,300 a year for full-time study, community-college tuition is already very low, these critics say, so it doesn’t make sense to give subsidies to students for whom affordability isn’t an obstacle.

Others see free community college as an investment, not a handout. They say it will ensure that the U.S. workforce has the skills needed to lead a global knowledge-based society.

Joshua Wyner, founder and executive director of the Aspen Institute’s College Excellence Program, argues in favor of free community college for all. Monica Herk, vice president of education research at the Committee for Economic Development, makes the case for limiting tuition breaks only to needy students.

YES: It’s an Investment in the Country’s Economic Future

If we want our nation’s economy to thrive and more people to enter the middle class, we need to close the gap between the percentage of jobs that will soon require a college education—60%, according to the Georgetown University Center on Education—and the percentage of working-age adults who have degrees now—about 40%.

Americans understand that the path to economic security almost always begins with postsecondary education. Despite rapidly escalating college costs, about two-thirds of young adults go right to college after high school (although just over half finish) and millions of adults seek retraining at our nation’s community colleges and four-year institutions.

The question for policy makers, then, isn’t whether—but how—to bridge the gap between the number of degree holders the U.S. has now and the number it is going to need. President Obama has proposed a compelling answer: make community college free.

Early evidence suggests it will work. In Tennessee, a free community-college bill signed into law by Republican Gov. Bill Haslam in May 2014 led to substantially higher enrollment rates during the subsequent academic year. More recently, comparable guarantees have been enacted into law in Chicago and Oregon and are being considered in other jurisdictions.

Proponents of these measures recognize that the people we most need to bring into the higher-education pipeline—including the growing population who would be the first in their families to attend college—are also the most price-sensitive. Even though Pell grants—federal aid for lower income students—cover most or all of community-college tuition, the appeal of “free” makes college seem possible to many who otherwise wouldn’t consider it.

Community-college tuition, though relatively low, represents only part of the challenge. Living expenses and books can easily cost three to five times the amount of tuition. The Obama plan would allow low-income students to use Pell grants for essential nontuition expenses after tuition is covered. This is especially important because research shows that when students finance college-related expenses by working more than halftime, which more than a third of all community-college students do, the chances of graduating drop significantly.

In the early 20th century, fewer than one-in-10 Americans attended high school. Over the century since, the advancing level of education fueled our economic growth, vaulting us far ahead of countries that failed to make similar investments. A high-school education became the norm because we as a nation understood its benefits.

The same is true for college education today. And yet, public financial support for higher education is eroding. While last year saw a small increase in state funding for higher education, those investments are nowhere near what they should be considering the drastic cuts made in previous years and the returns that many economists have found college education bestows on individuals, communities and the nation as a whole.

Free community college flips the script. Rather than subjecting our notions of an appropriate baseline education to annual budget processes, President Obama’s proposal sets a new standard that fits our modern knowledge economy—we should pay for the level of human capital we need as a nation by making the first two years of higher education free for anyone who enters a community college.

There are significant details to be ironed out to make “free” work. Community colleges in some states are already bursting at the seams, and graduation rates need to improve. Many states also may find it challenging to fit “free” community college into constrained budgets. 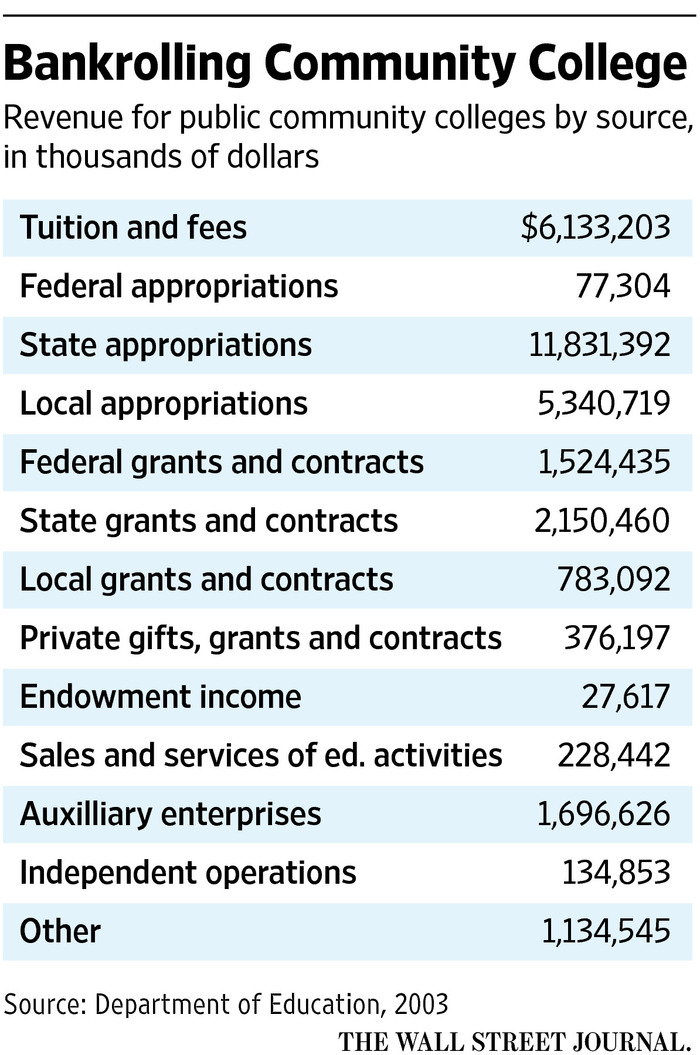 But the answer isn’t to limit tuition breaks only for certain majors. The skills employers want and need are rapidly changing and can be imparted through many fields of study. Do we really want the government setting variable cost by college major?

Nor should we provide the tuition break only to needy students. The power in the idea of free community college is that it applies to everyone. Free tuition won’t send students from the middle class and higher flocking to community colleges, crowding out their more-disadvantaged peers. If they were that price-sensitive, they would already be there.

These challenges didn’t deter Tennessee, and they shouldn’t divert policy makers elsewhere from considering the imperative that President Obama’s proposal addresses: how to ensure that the U.S. workforce has the skills needed to lead a global, knowledge-based economy. Paying for community college isn’t a handout; it’s an investment.

Mr. Wyner is founder and executive director of the Aspen Institute’s College Excellence Program and author of “What Excellent Community Colleges Do: Preparing All Students for Success.” He can be reached at reports@wsj.com.

NO: It’s Better to Help People—and Majors—That Will Pay Off

It’s hard to oppose the intent behind recent proposals to make community college free. Expanding education and job training would narrow both the nation’s jobs-skills gap and increase equality of opportunity. But unless we limit tuition breaks to those who really need them, and only for fields of study that lead to gainful employment, we’re looking at a huge costly entitlement with little return on investment.

Here are the main reasons why free community college for all isn’t a good idea:

1. Not everyone needs free tuition.

Like any subsidy that aims to change behavior, price breaks on tuition should target those who aren’t already behaving in the desired manner. Otherwise, they are simply a wealth transfer without impact.

Although tuition isn’t free now, approximately 40% of all U.S. college students choose to enroll in community colleges, according to the National Center for Education Statistics. Efforts to improve Americans’ education and skills should target people who otherwise wouldn’t or couldn’t complete college, such as those who are working more than half-time to cover their expenses. If community college becomes tuition-free regardless of income, many middle-class and higher students may enroll to avoid tuition for two years before transferring to a four-year college, possibly crowding out less-advantaged students. That is why any tuition reductions should be means-tested to target those students for whom affordability is a barrier to completion.

2. Not all fields of study need taxpayer support.

If free community college prompts more students to pursue and complete training in skills and degrees in high demand among employers, then there is a net benefit to the student (in future earnings) and to society (in higher gross domestic product as the stock of human capital improves relative to other countries). But if students choose training in skills or degrees that they either fail to complete or that are unlikely to lead to a well-paying job following completion, then they have simply added to public expenditures without benefiting themselves or the economy. They would be better off gaining experience and earnings in any job than in wasting time on a nonproductive degree.

Price breaks on tuition should be limited to the coursework, skills and degrees in demand by regional employers. This could be certified through annual regional surveys that also would provide valuable information to all seeking employment and training, not just those enrolling in community colleges.

3. Not all community colleges make the grade.

If we want more Americans mastering high-demand skills, it isn’t enough simply to increase enrollment. Completion matters, and recent studies have shown that affordability is only part of what hinders community-college students. Colleges must provide high-quality training focused on needed skills and help students reach successful completion. Yet community colleges face questions about low retention rates (only one-in-five full-time students complete their two-year degree within three years of entering, according to the National Center for Education Statistics) and often, the quality of their instruction.

Indeed, a recent commission sponsored by the American Association of Community Colleges concluded that community colleges need to do more to help students plan their educational goals; scale back boutique courses; collaborate more with business and industry to shape curriculum, fund needed programs and equipment, and provide internships and job placements; and work more closely with high schools and four-year colleges to increase learning and streamline transitions.

4. The cost to taxpayers is high.

Making community college free will reduce costs for families but increase them, probably significantly, for taxpayers. First, there’s the portion of costs currently covered by tuition that would be shifted to taxpayers. And second, free tuition would increase the overall enrollment and size of community colleges relative to today. Simply put, people consume more of pretty much anything when the price to them is reduced.

Who, exactly, will foot the bill for free community college? Government expenditures are justified when their public benefits exceed their costs. More carefully targeted tuition-reduction programs meet that test. But free community college threatens to be either another federal budget buster or an unfunded mandate to cash-strapped states, which have already proven reluctant to fund community colleges adequately.

Dr. Herk is vice president of education research at the Committee for Economic Development. She can be reached at reports@wsj.com.