The president’s budget gives more power to bureaucrats, takes more from taxpayers to fuel the expansion of government, and commits our nation to a future of debt and decline.

Less than a year ago, the House of Representatives passed a budget that took on our generation’s greatest domestic challenge: reforming and modernizing government to prevent an explosion of debt from crippling our nation and robbing our children of their future.

Absent reform, government programs designed in the middle of the 20th century cannot fulfill their promises in the 21st century. It is a mathematical and demographic impossibility. And we said so.

We assumed there would be some who would distort for political gain our efforts to preserve programs like Medicare. Having been featured in an attack ad literally throwing an elderly woman off a cliff, I can confirm that those assumptions were on the mark. 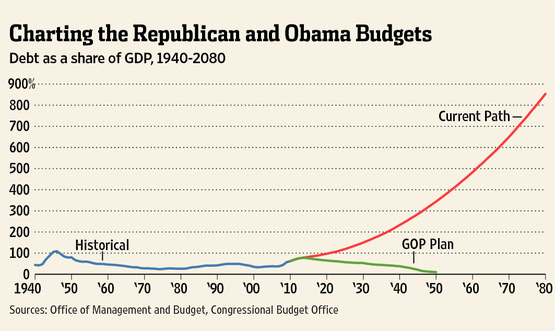 But one year later, we can say with some confidence that the attacks have failed. Courageous Democrats have joined our efforts. And bipartisan opposition to the path of broken promises is growing.

And so Tuesday, House Republicans are introducing a new Path to Prosperity budget that builds on what we’ve achieved.

Like last year, our budget delivers real spending discipline. It does this not through indiscriminate cuts that endanger our military, but by ending the epidemic of crony politics and government overreach that has weakened confidence in the nation’s institutions and its economy. And it strengthens the safety net by returning power to the states, which are in the best position to tailor assistance to their specific populations.

More important, it tackles the drivers of our debt and averts the fiscal crisis ahead. This year, our nation’s publicly held debt is projected to reach 73% of the economy—a dangerously high level that, according to leading economists, puts the nation at risk of a panicked run on its finances.

As shown in the nearby chart, our budget tackles this crisis head-on by cutting debt as a share of the economy by roughly 15% over the next decade, putting the nation’s finances on a path to balance, and paying off the debt. By contrast, the president’s budget pushes debt as a share of the economy even higher. In his budget’s own words, it allows the government’s fiscal position to “gradually deteriorate” after 2022.

On the critical issues of health security and tax reform, our budget draws a clear distinction between serious reformers and those who stand in the way of the growing bipartisan consensus for principled solutions.

Our budget’s Medicare reforms make no changes for those in or near retirement. For those who will retire a decade from now, our plan provides guaranteed coverage options financed by a premium-support payment. And this year, our budget adds even more choices for seniors, including a traditional fee-for-service Medicare option.

We also introduce a competitive-bidding process to determine the growth of government’s financial contribution to Medicare. Forcing health plans to compete against each other is the best way to achieve high-quality coverage at the lowest cost, and implementing these reforms in Medicare can have the effect of lowering health-care costs for everyone. This is the key to increasing access and affordability while preventing government debt from threatening the health security of seniors and the economic security of all Americans.

We propose to reduce the corporate tax rate of 35%, which will soon be the highest rate in the developed world, to a much more competitive 25%. Our budget also shifts to a “territorial” tax system to end the practice of hitting businesses with extra taxes when they invest profits earned abroad in jobs and factories here at home.

We reject calls to raise taxes, but revenue nevertheless remains steady under our budget because we close special-interest loopholes. More important, our reforms will grow the economy—and the faster the economy grows, the more revenue the government will have to meet its priorities and start paying down the debt.

These patient-centered Medicare reforms and pro-growth tax reforms have a long history of bipartisan support. Medicare reforms based on choice and competition have their roots in the Clinton administration’s bipartisan Commission on the Future of Medicare. And in recent years, I’ve worked with Democrats to advance these reforms.

Tax reforms based on lowering tax rates and closing loopholes go back to the Reagan administration, when Democrats served as the congressional co-sponsors of the landmark 1986 tax reform law. More recently, the chairmen of President Obama’s bipartisan fiscal commission put forward a plan for lower rates and a broader base.

It makes sense that these ideas have attracted leaders in both parties. The premium support model offers the only guarantee that Medicare can keep its promise to seniors for generations to come. And pro-growth tax reform, by lowering rates for all Americans while closing loopholes that primarily benefit the well off, can eliminate unfairness in the tax code and ensure a level playing field for all.

With regard to Medicare, his latest budget calls for giving “additional tools” to the Independent Payment Advisory Board, an unaccountable board of 15 unelected bureaucrats empowered by the new health-care law to cut Medicare in ways that will lead to denied care for seniors. Just this month, Democrats and Republicans alike voted for a measure to repeal this board.

And with regard to tax reform, the president’s latest budget calls for taking more from American families and businesses by raising rates and adding complexity to the tax code—precisely at odds with the bipartisan consensus for tax reform.

It is rare in American politics to arrive at a moment in which the debate revolves around the fundamental nature of American democracy and the social contract. But that is where we are. And no two documents illustrate this choice of two futures better than the president’s budget and the one put forward by House Republicans.

The president’s budget gives more power to unelected bureaucrats, takes more from hard-working taxpayers to fuel the expansion of government, and commits our nation to a future of debt and decline.

The contrast with our budget couldn’t be clearer: We put our trust in citizens, not government. Our budget returns power to individuals, families and communities. It draws inspiration from the Founders’ belief that all people are born with an unalienable right to the pursuit of happiness. Protecting this right means trusting citizens, not nameless government officials, to decide what is in their best interests and make the right choice about our nation’s future.

Mr. Ryan, a congressman from Wisconsin, serves as chairman of the House Budget Committee.

The Op-Ed by Paul Ryan appeared on the WSJ