This is a good time to welcome immigrants. Shutting the door to them may shut the door to growth and lead to greater deficits. Addressing illegal immigration and border security became a priority after the September 11 terrorist attacks. At the same time, skill-based immigration surged as demand for STEM (science, technology, engineering and mathematics) workers and other skilled professionals remained strong despite the ups and downs of the business cycle.

The immigration trends are revealing

Given these now long-standing trends, it shouldn’t be surprising that illegal immigration has declined sharply and educational attainment of the current immigrant flow has increased dramatically. One might conclude that we are well on our way toward reaching at least two of our nation’s primary immigration goals.

With trends headed in the right direction, policymakers’ outsized focus on further restricting immigration is puzzling, particularly in light of the robust U.S. economy. Gross domestic product is growing at its fastest rate in over two years, a 3.2 percent rise in the most recent reading. The unemployment rate, meanwhile, is near 4 percent nationally, and in states such as Texas, it’s even lower, at levels not seen since the 1970s.

With trends headed in the right direction, policymakers’ outsized focus on further restricting immigration is puzzling, particularly in light of the robust U.S. economy.

Recent tax law changes are expected to add to this already fast-growing economy. They should incentivize U.S. corporations to repatriate earnings from abroad, expand production domestically and increase investment. Capital needs labor to produce output; can this need be met with further cuts to immigration?

The current expansion has been short on foreign-born workers by historical standards. As the chart suggests, employment surged during the recovery while immigration of workers stagnated. According to the Bureau of Labor Statistics, employment grew by 12.4 million workers between 2010 and 2016, with immigrants accounting for just 31 percent of that expansion. Immigrants had represented more than 50 percent of labor force growth in the decade leading up to the Great Recession.

Capital needs labor to produce output; can this need be met with further cuts to immigration? 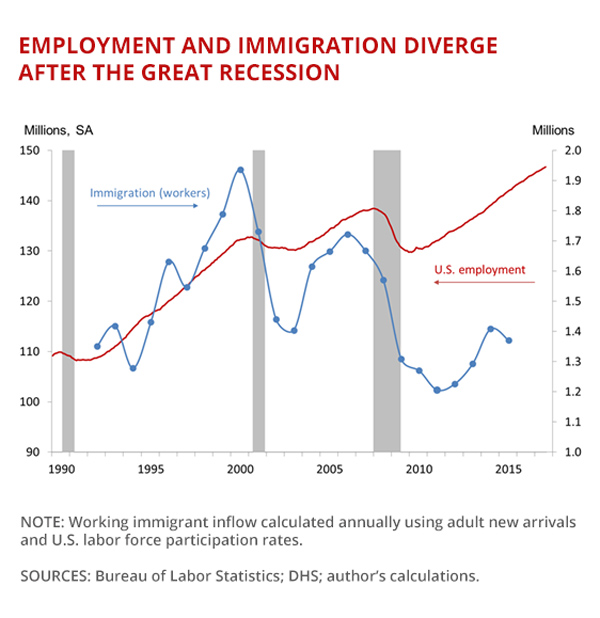 Declining illegal immigration is the main reason for the slowing immigrant inflow in the post-recession period. Migrant apprehensions along the Southwest border are down 75 percent from their peak of 1.6 million in 2000.

The flipside of this trend: The current immigrant stream is not only much more likely to enter legally than in the past, but is also far more educated. Of the 2.7 million foreign-born workers ages 25 or older added since the recession, more than 2 million had a college degree or higher. Meanwhile, the number of adult foreign-born workers with less than a high school education shrank by more than 300,000 over the period.

The high-skilled immigrants are mostly from Asia. Since 2010, new arrivals from India and China have surpassed those from Mexico in every year.

This conclusion is bolstered by evidence of immigrants’ direct contributions to patenting and other innovative activity, including entrepreneurship. High-skilled immigrants fill positions in key industries; the economic benefits of their labor are now well documented.

The fiscal impact is not what you might think

But another less publicized benefit of high-skilled immigration is its fiscal impact — what these arrivals contribute in taxes minus what they consume in publicly provided services. Fiscal estimates recently published by the National Academies, the best source for such numbers, are shown in the table.

The estimates are of the long-run per capita net fiscal contributions of recent immigrants, those who arrived in the prior five years, and of all immigrants. Long-run or lifetime fiscal estimates are preferred to short-run estimates when, for example, evaluating fiscal impacts for the purpose of formulating immigration policy.

The table shows the fiscal impact with and without assigning immigrants the cost of “public goods” — the cost of such things as national defense spending, interest on the debt and foreign aid. The top row is the weighted average of the remaining rows, which shows fiscal impacts by the education level of the immigrant. Education level is a key determinant of income, so it is an effective predictor of fiscal impact.

Table
75-year Per Capita Net Fiscal Impacts for Recent and All Immigrants, by Public Goods Scenario and Education Level (2012 dollars)

Source: Estimates from The Economic and Fiscal Consequences of Immigration, Table 8-12, p. 341. Net present values are in thousands of 2012 dollars; forecast is based on the Congressional Budget Office long-term budget outlook. Includes taxes and expenditures at the federal, state and local level for an individual and dependents.

While immigrants are often portrayed as a net fiscal burden, the table shows that in dynamic, long-run scenarios, the present value of the net fiscal impact of immigration is typically positive and can be quite large. If we assume that an additional immigrant does not increase spending on public goods, which is a reasonable assumption, a new immigrant represents a positive fiscal contribution with a net present value of $259,000.

If we assume that an additional immigrant does not increase spending on public goods, which is a reasonable assumption, a new immigrant represents a positive fiscal contribution with a net present value of $259,000.

Some of the estimates in the table are truly astounding. On average, a recent immigrant with more than a college degree contributes on net more than $800,000 to government coffers over a 75-year period. In contrast, a typical recent immigrant lacking a high school diploma represents a net cost of about $117,000.

Interestingly, this net cost does not reflect disproportionate outlays as compared with similar natives. For what it’s worth, although low-skilled immigrants impose a net fiscal cost, the net fiscal cost of natives of similar education is far larger. One should bear in mind that our tax system is designed to help low-income families; it shouldn’t be surprising that they, whether immigrant or native, are not net fiscal contributors.

A good time to welcome immigrants

Cuts to immigration may render some benefits to substitutable native workers in the short run, but are likely to hamper hiring, investment, and productivity growth in the long run. With a robust economy, tax cuts underway, and tax reform likely to boost the incentive for firms to invest, labor supply may be where the rubber hits the road.

Cuts to immigration may render some benefits to substitutable native workers in the short run, but is likely to hamper hiring, investment, and productivity growth in the long run.

Immigrants and their children have made up the bulk of labor force growth in recent decades; given the aging U.S. population, we cannot expect natives to fill that gap going forward. And, with the recent tax cuts estimated to add to future federal deficits, there is an added incentive to bring in immigrants, particularly high-skilled immigrants who work and contribute outsized amounts to the fiscal balance.

In sum, given that immigration is both more likely to be legal and highly skilled than at any other time in recent history, and with the fiscal and economic benefits of such flows convincingly demonstrated, it seems like a good time to welcome immigrants rather than shut the door.