But probably the biggest display of strength came in the Electoral College. Trump will most likely have the most electoral votes of any Republican president since George H.W. Bush’s landslide in 1988. Without major data analytics or a field operation, Trump managed to win Pennsylvania, Wisconsin and (most likely) Michigan, two places where the last Republican president, George W. Bush, tried mightily to win, but twice came up short. Trump came about one percentage point away from becoming the first Republican candidate to carry Minnesota since 1972.

In another sense, however, it is a fragile win. Trump probably lost the popular vote, although exit polls suggest it would have been a tied election in a two-way race. His victory was driven as much by the fact that his supporters were dispersed extremely efficiently as by any deep electoral support. Clinton built up her popular vote margin by achieving a single-digit loss in Texas, which is impressive, but still a loss. Trump’s wins in Pennsylvania, Michigan and Wisconsin were all in the neighborhood of a single point. A slight shift in his support – a slight erosion in white support or a boost in African-American turnout – and he would lose in 2020.

So where does the Republican coalition go from here? It is tempting to say the Republican gerrymanders insulate the party from danger in the midterm election. This would be foolish. People offered the same analysis in 2005, and even into early 2006. The problem with gerrymanders is that coalitions shift, and they all crumble past a certain point. It is likely Trump will encounter a recession at some point in his term, and if it hits at the wrong time, the GOP maps will certainly fall.

The Senate is a different story. The banner GOP class of 1994 has been hollowed out in subsequent elections, losing four seats in 2000, six seats in 2006, and another two seats in 2012. The result is a Senate class with Democrats having to defend 23 seats in 2018, while Republicans only have to defend eight. Moreover, as the chart on the left shows, Republicans are only defending one seat – Dean Heller’s in Nevada – where Trump lost, and really only have one more in marginal territory (Sen. Jeff Flake’s in Arizona). The chart on the right shows Democratic seats in play. In each chart, the right column indicates Trump’s percentage of the vote in each state (based on the two-party vote). 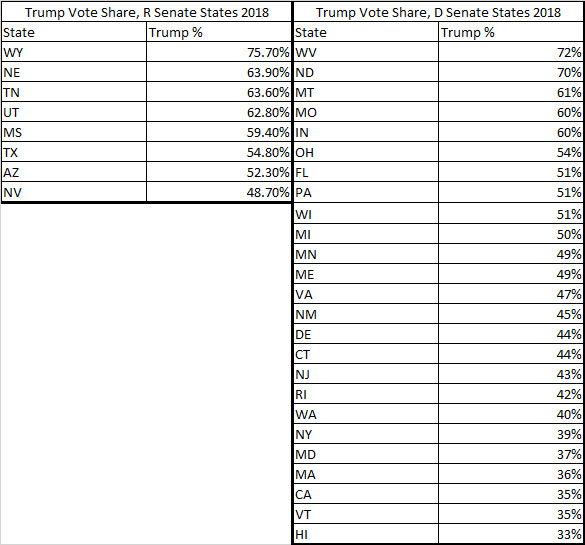 Democrats are defending four seats where Trump won 60 percent of the two-party vote, another five seats where Trump won, and another two in marginal territory. The rule that parties that hold the presidency always lose seats in midterm elections is weaker for the Senate, but Trump’s job approval ratings would probably have to plumb new depths before the Senate flipped control.

In other words, Republicans will probably own the next four years. Given the uncertainty in the global economy, in foreign policy, and in domestic affairs, it is a rough time to have that responsibility. Since Trump is already starting out with a brittle coalition, further erosion would spell doom for him.

But as with the Obama coalition, there are opportunities for Republicans. If Trump governs well – if the recession is delayed or brief, he could conceivably hold on to his white working-class support while bringing college-educated whites back into the fold – he would have a hard time losing. Combining Trump’s share of the white working class with Romney’s share of college-educated whites would give him around 63 percent of the white vote, and most of what he would need to win re-election.

Of course, if Trump were to govern as a pragmatist by, for example, abandoning economic libertarianism, endorsing infrastructure spending, making good on his plan to build a wall, but with a “big beautiful door” in it, and attacking special interests, he could have cross-racial appeal. I’ve long believed that the GOP’s best bet with non-whites was not to try and out-identity-politic the Democrats, but rather to come at them from the side, via a class-based appeal. Trump offers an interesting experiment. Given how low expectations are set for him, he will be graded on quite the curve (as he was during the campaign, I think).

This is what you might call the optimistic scenario for Trump, which ends in a strong re-election. The pessimistic view is that Trump turns out to be everything he seemed to be when he was at his worst on the trail: erratic, boisterous, and at times mean-spirited. If this is the case, the Republican majorities might not survive the midterm elections, and he might lose in a landslide in 2020.

I’ll close with this: I think a great many analysts are banking on this last scenario. It is certainly a very real possibility. But analysts, including myself, have underestimated Trump for 500 days now. I’m at least open to the possibility that he knows quite a bit more about politics and this country than I’ve given him credit for.