October was clearly a cruel month for both President Barack Obama and the Republicans, both of whom saw their images slump to new lows in Wall Street Journal/NBC News polling.

But hidden within the data is a more disturbing reality for the Republican Party. Put simply, Democrats are largely content with their own party, while distaste among Republicans for the GOP has grown exponentially this year. The most recent Wall Street Journal/NBC News poll, offers a stark window into widening divisions within the GOP over strategy and what kind of leaders Republicans want going forward. The Democratic Party, by comparison, is a picture of unity.

Here are a few glimpses at the very different paths the two parties are now on.

In December, just a month after the GOP experienced a string of election losses, nearly two-thirds of all Republicans held a positive view of their party. Ten months later that share has dropped to less than half.

Among those who are more wavering in their ties to the GOP—a group that is nearly twice the size of the party’s most fervent followers—affection for the party in the latest poll dropped to 35%, with almost an equal number saying they viewed the party in a negative light. (See table at bottom of this post.)

By comparison, nearly three-quarters of all Democrats in the poll said they have a positive view of their party, down just slightly since the end of last year. Even the more wavering among the Democrats are positive toward their party (61%).

The sharp divisions over political style with the GOP also have no corollary among Democrats.

A good example is Texas Sen. Ted Cruz, widely seen as a chief architect of the showdown that led to last  month’s government shutdown.

A similar break can be seen over the question of whether Republicans want their party members in Congress to make compromises to gain a consensus on budgetary matters, or stick to their positions even if this means no budget agreement.

When the same question was asked of Democrats, a solid 68% favored compromise, with little variation among liberals and more wavering Democrats.

The overall sourness of public sentiment toward the political status quo has triggered another round of yearning for a potential third party.

And again, that desire appears strongest on the right.

Asked if they would be more likely to vote for an independent or third-party candidate for Congress if one existed in their district, just 19% of Democrats said they would.

But among all Republicans, that number was 28%. And among wavering Republicans—who constituted nearly a quarter of the poll’s registered voters—the desire to vote for a third-party candidate was a startling 41%.

Do you have a positive or negative view of your own party? 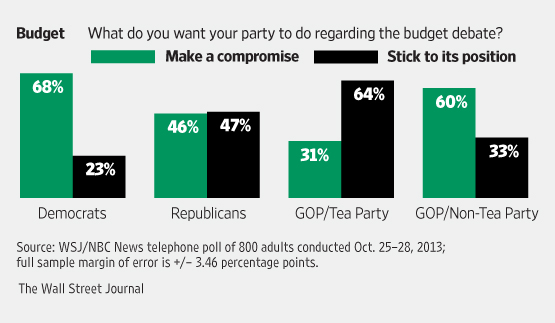