Some GOP Senators are shrinking from entitlement reform.

With the Senate health-care bill delayed for now, the conservative and more centrist GOP wings need to bridge a philosophical gap to succeed. The outcome of this debate will define what the Republican Party stands for—and whether the problems of America’s entitlement state can ever be solved.

The biggest policy divide concerns the future of Medicaid, and here the problem is the moderates who are acting like liberals. Despite their campaign rhetoric, some Senators now want to ratify ObamaCare’s Medicaid expansion as an unrepealable and unreformable welfare program.

Most of the Affordable Care Act’s insurance coverage gains have come from opening Medicaid eligibility beyond its original goal of helping the poor and disabled to include prime-age, able-bodied adults. The federal-state program has become the world’s single largest insurer by enrollment, covering more people than Medicare or the British National Health Service. Total spending grew 18% in 2015 and 17% in 2016 in the 29 states that expanded, and the nearby chart shows the growth of overall federal Medicaid spending under current law and without reform.

The Senate bill attempts to arrest this unsustainable surge by moving to per capita spending caps from an open-ended entitlement. When states spend more now, they generate an automatic payment from the feds. The goal is to contain costs and give Governors the incentive and flexibility to manage their programs. 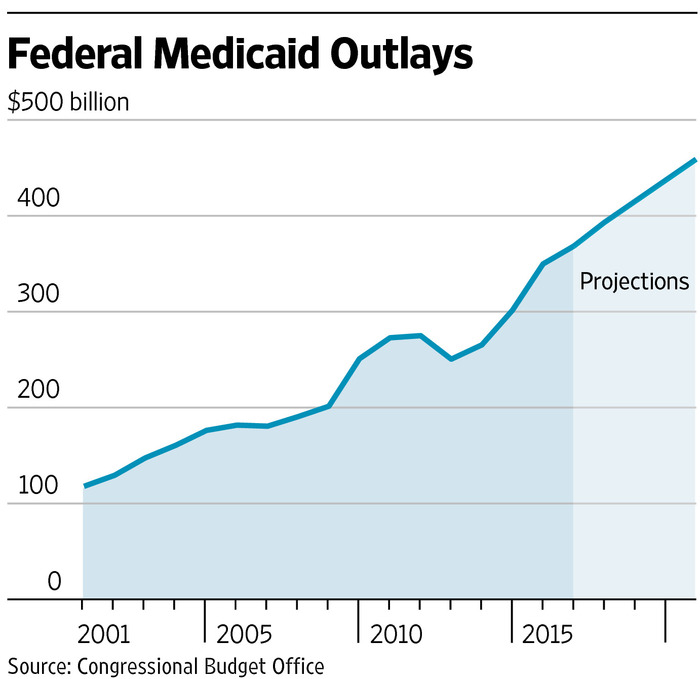 Meanwhile, four long years from now, the bill would start to phase-down the state payment formula for old and new Medicaid beneficiaries to equal rates. Governors ought to prioritize the most urgent needs.

This would be the largest entitlement reform ever while still protecting the most vulnerable. The bill is carefully designed to avoid overreach and would save taxpayers $772 billion compared with what Medicaid would otherwise spend under current law, according to the Congressional Budget Office. This does not “cut” spending; it merely slows the rate of increase.

This has nonetheless made some Senators nervous, like West Virginia’s Shelley Moore Capito and Ohio’s Rob Portman. The growth rate for the block grants would be set at the rate of medical inflation for most beneficiaries at the start and then fall to the consumer price index in 2026, which is more ambitious than the House bill. Some Senators would like to see more generous growth rates, while others favor waiting six or seven years, rather than four, to start the phase-down of the expansion.

The danger is that both approaches could dilute reform to the point where it’s not worth the political trouble and wouldn’t improve the federal fisc. Postponing change until after 2020 means waiting a political eternity, and a formula that on paper says the government will cut spending in the future is already uncertain enough fiscal discipline. It certainly doesn’t qualify as cruel, barbaric, or any of the other adjectives the bill’s critics are abusing.

More to the political point, Republicans run in every election on cutting federal spending and a smaller, more efficient government. Well, here’s their best chance in a generation, and eventually Republicans will have to follow the money.

Some 65% of the federal budget is mandatory spending, meaning Social Security and the health-care entitlements. Interest on the debt is 6% and more than half of the discretionary budget flows to defense. The GOP can’t meaningfully reform government or increase defense spending without fixing Medicaid and replacing ObamaCare.

The alternative will be much higher levels of taxation across society, reaching deep into the middle class, or a debt crisis. “To avoid fiscal and economic calamity,” as one GOP Senator wrote in a 2014 op-ed on these pages, Washington must “reform Social Security and health entitlements. The CBO estimates that a deal saving $4 trillion over the decade would put the budget on a path to sustainability. . . . The longer we wait to enact reforms, the more abrupt and painful they will be. It is time for everyone to come together and start to erase the red ink.”

That Senator was Mr. Portman, a former White House budget director and member of the “super committee” of 2011 that tried to negotiate entitlement reform with Barack Obama. The Senate bill doesn’t save close to $4 trillion but you’ve got to start somewhere.

Someone should also ask the Governors like John Kasich who are predicting doom a substantive policy question or two. Some 43% of the Ohio all-funds budget goes to Medicaid compared to a mere 14% for K-12 education. The average state all-funds Medicaid share is 28%. Does Mr. Kasich think this is the correct fiscal priority for America’s future—skimp on educating the next generation to finance free health care for able-bodied adults?

If Republicans fail to pass a bill or weaken the Senate bill so much that it won’t make a difference, the result will be a calamity of a different kind. GOP Governors who declined to join ObamaCare’s new Medicaid will conclude that the expansion is permanent and the political pressure will rise to take the federal bribe. Medicaid costs will soar, and national Republicans will show that they’re incapable of doing what voters sent them to Washington to do.

Democrats will conclude that Medicaid is politically untouchable and thus a wedge for single payer. They’ll enlarge eligibility to ever-higher income levels and gradually crowd out private insurance. Republicans won’t have a plausible argument against the idea if they can’t reform Medicaid now.